Wrestling with Texts, Striving with God: Rabbi Kushner on Job 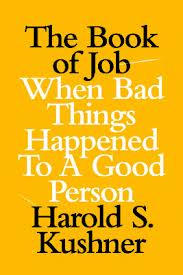 ‘You’re not ready to write that,’ a doctoral supervisor at Jewish Theological Seminary told the young assistant rabbi Harold Kushner about his research proposal in the mid-1960s. The suggested topic, prompted by his early experience consoling grieving congregants, was the biblical portrayal of God’s role in the midst of human tragedy.

While the project was formally shelved, the unavoidable question was soon acutely felt when Kushner and his wife learned that their young son suffered from the rare disease progeria. From age three, the boy aged rapidly until a shockingly early death not long after his bar mitzvah. In facing such a harrowing ordeal, Kushner read all he could, from information on the affliction itself to coping with a child’s death. The endeavour led him irresistibly to the book of Job.

In contrast to frequently insipid synopses—such as that Job is an example of ‘patience under suffering’—Kushner found the book’s candour deeply affecting in the midst of his own grief and anger. In particular, he came to recognize Job’s early riposte to his would-be comforters as one of the most liberating verses of scripture, paraphrasing the line as, ‘if God is as great and as devoted to truth as we like to think He is, then I believe He will prefer my honesty to your flattery.’ Drawing out the implications of these words, which too seldom inform approaches to God, religious or otherwise, Kushner states that, ‘you cannot love someone wholeheartedly (“with all your heart”) unless you feel free to be angry at that person when circumstances warrant.’ Nearly fifty years after having been deemed unready, Kushner’s publication ventures such honest love, borne of suffering.

The Book of Job: When Bad Things Happened to a Good Person is the latest title in the Schocken / Nextbook Jewish Encounters series, edited by Jonathan Rosen. Kushner’s volume is a significant representative of the series in not only treating a major literary work, but doing so through a characteristically Jewish approach to texts as a primary locus through which we encounter others and, ultimately, God. Readers of Foment will appreciate how such an interpretive community can model gathering around shared writings while simultaneously fostering, qua community, vigorous independence of mind. Rather than posturing as a lone guru, Kushner’s interaction with Job via interpreters from Maimonides to Martin Buber enriches both his congruent readings and his dissent.

As many of us have become inured to the appalling senselessness of tragedy through hasty, repetitive media coverage, addressing the question of suffering requires sustained attention to more enduring sources. The first welcome aspect of Kushner’s invigoratingly rabbinic book, then, is his skilled habit of wrestling with texts. While some of his other writings have been classed as self-help, here Kushner braves close commentary on an ancient, sophisticated, passionate, convoluted scriptural text.

Though drawing on his academic studies in the Tanakh and a lifetime of rabbinic meditation, Kushner seeks to give the reader her own direct encounter with Job, often filling the page with extended citations. In laying bare the text, he does not shy from naming text critical problems, such as when he exposes suspected scribal emendations that soften the force of Job’s accusation against God. Moreover, when he comes upon a portion of seemingly incoherent, fragmented Hebrew, rather than quickly citing faulty transmission he considers it a possible portrayal of how trauma can impede speech, or how dialogue can break down at an argument’s impasse.

While Kushner’s persistence with the book is admirable, there are times I wish he would press further. He has obvious impatience with the Fable that frames the book in chapters 1-2 & 42, particularly given that its diffident piety is the primary basis for ‘modern retellings’ such as the recent film A Serious Man .  While his compensatory emphasis is rightly on the Poem that spans the central 40 chapters, he oversteps in claiming that, ‘the author of the poem totally leaves the Fable behind,’ later dismissing its conclusion as ‘simpleminded.’ While critical scholarship does indeed recognize that a neat folk tale has been combined with an unruly poem, scholars have also suggested that the poetic co-optation of the former is hardly uninspired. Indeed, the use of unprecedented lists of superlatives to describe Job’s righteousness, or the incredible depictions of religious observance such as pre-emptive sacrifice for his children, suggest the presence of subversion, even parody, within the Fable itself. Recognizing an artistic coherence between the adaptation of the Fable and the Poem that does not merely repeat the former’s hagiography but undermines it through ironic excess would actually strengthen Kushner’s case.

Eventually, Kushner’s wrestling with the book of Job and its interpreters not only exposes the text, but also the reader. At one point, Kushner recalls a humanities midterm exam in college, which consisted of an uncomfortably probing pair of questions: ‘[1] Of all the books we have read this semester, which one did you enjoy least? [2] To what limitation in yourself do you attribute this inability to appreciate an acknowledged classic?’ Taking his cue from such reverse scrutiny, Kushner makes a compelling case for reading that recognizes those books ‘meant not just to divert us or enhance our earning capacity but to change us as we read them.’

Such anticipated transformation draws on the ancient story of Jacob wrestling the stranger, in which he was wounded, renamed, and blessed. Kushner’s allusion to this story directs us to the encounter at the centre of the Job narrative, and so of any close commentary: the call to wrestle with God. That Kushner is willing to speak in such frankly theological terms is particularly significant given the surge in extremist violence in the divine name and the oppositional stridency of so-called new atheism, neither of which dare the more courageous and vulnerable protest of love rendered in the Job poem.

Readers who have tired of trite theodicies will appreciate Kushner’s high standards for any answer to the problem of good people suffering in a world under God’s control. This includes the ability for it to address a Holocaust survivor with due deference. ‘Finally, and personally,’ Kushner presses, ‘I deem unacceptable any explanation of God’s role in our suffering that leaves people thinking less well of God than they did before.’ That this book revises the conclusions of his 1981 bestseller on the same theme because some readers had just this response is a testament to Kushner’s integrity.

As unready as we are to probe the depths of another’s suffering, much less the divine, Rabbi Kushner invites a practice of fellow reading that reminds us we are not alone in the questions. Along with taking courage from such solidarity, the book of Job’s character as scripture might lead us to further reflect on how God is closer to our all-too-human words of protest than we think.