Think Beyond Your Own Fork: Food and Community with Nick Saul and Andrea Curtis 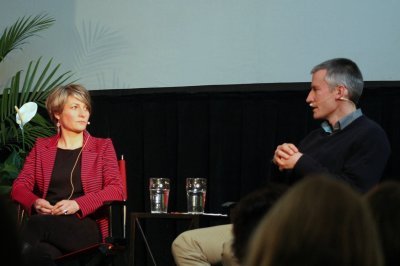 Give me anything relating to community, grassroots movements, or social justice, and I’m all in. And, judging by the attendance at this afternoon’s talk with Nick Saul and Andrea Curtis, it seems like plenty of other attendees were with me too.

The recent book collaboration by Saul and Curtis—the subtitle of which I will skip repeating, considering the authors did the same—chronicles the story of, in short, moving from transactions to transformation. The Stop , a small food bank that Nick Saul began working at in 1998 on Davenport Road in Toronto, has now blossomed into a well-staffed organization with a $4.5 million dollar annual budget. As host Joanne Chianello of the Ottawa Citizen pointed out, the accomplishments of The Stop are far too numerous to list.

The Stop is now a community food centre rather than a food bank. Saul and Curtis describe The Stop's model as one which embraces dignity, hope and humanity. They also jokingly refer to it as a family business, an accurate statement based on their partnership, and Curtis’ early (and volunteer) communications work for the organization.

One of the resounding themes of Nick Saul and Andrea Curtis’ talk today—and, of course, in the work they do on the ground—is that it is essential to remove the ever-common ‘us versus them’ divide. As Saul and Curtis can attest from their early days involved with The Stop, a food bank is just a band-aid; a transaction in which one person gives and another receives. They believe that people are more than just consumers of food.

There are three million people in Canada who are food insecure, which is the equivalent of Saskatchewan’s population three times over. For the number buffs out there, that’s almost nine percent of our entire population as a country. That is, clearly, far too many people without adequate and appropriate food.

I admit that I just picked up my copy of Saul and Curtis’ book, but I can predict that it will be a delightful read. Today’s talk emphasized the importance and power of storytelling, and—especially from Curtis’ point of view—reclaiming social history. Thus, Saul and Curtis’ book not only tells rarely heard stories, but moreover empowers the story tellers. As Nick Saul pointed out, stories are not easily dismissed, whereas ideas often are.

From days of the early 1980s at St. Stephen-of-the-Fields, to the mid-1990s at the Davenport location, to the current national expansion work via Community Food Centres Canada, The Stop has made a lot of progress over the years. One highlight Saul and Curtis discussed is The Stop’s somewhat recent project The Green Barn. Located in an old TTC maintenance barn, The Green Barn provides educational centres, sheltered gardens, greenhouses and kitchens. Saul and Curtis remarked that this particular project is a great avenue to bridge gaps; because relationships built at The Green Barn—which is located in a more middle class and thus economically stable area than the Davenport location—can lead to creative solutions to hunger.

As Saul reminded, you have to create spaces for the future you want to see. Clearly, Nick Saul and Andrea Curtis are working tirelessly for the future they want; one centered around maintaining dignity for all people while ensuring they have access to good healthy food and a safe community.