The Reality Bubble: Ziya Tong in Conversation with John Geddes 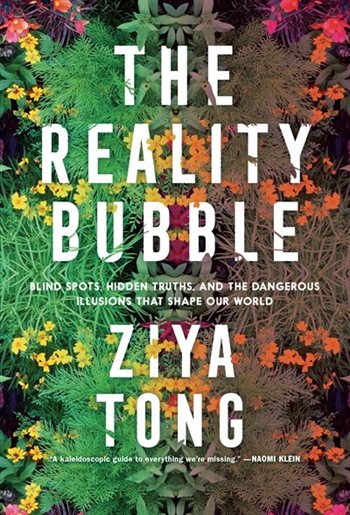 Last Saturday, Ziya Tong led a riveted audience through some of the questions that have been circling her mind throughout her remarkable career as a science journalist, producer and award-winning broadcaster. Tong, who anchored the Discovery Channel’s Daily Planet from 2008 to 2018, has recently finished her first non-fiction book. The Reality Bubble: Blind Spots, Hidden Truths and the Dangerous Illusions That Shape Our World will be available in bookstores on May 14th.

Throughout her talk and subsequent discussion with host, John Geddes, Tong revealed an intellectual curiosity which runs through all her work, even confiding that she has a question-mark shaped tattoo on the back of her neck mark as a symbol of her inquisitive nature. Geddes praised The Reality Bubble for its density, praising its scientific data as well as its anecdotes. He also asked Tong to elaborate on some of the challenges she faced in her research. In her responses, Tong was approachable and charismatic, and when she described the process of writing this first book, she quoted Yoda of Star Wars. (It was May the 4th, after all). She described it as a process of unlearning all that she had previously learned.

The unlearning process is also a useful metaphor for the experience of reading The Reality Bubble. While few people had the opportunity to read the book before her talk, Tong explained that it is not an “environmental” book. She does not want people to approach it with preconceptions or a sense that they know what will be written on its pages. Instead, Tong hopes to convey all that we take for granted as humans; all that our collective understanding fails to appreciate of the world and of other species. For example, she conceded that many animals understand our language: Coco the gorilla responds to thousands of signs; whales and dolphins follow commands to jump and play in marine parks; dogs grasp the meaning of hundreds of human words. But what do we understand of other species’ communication patterns? For the most part, nothing at all. We pat ourselves on the back for building airplanes, landing on the moon and communicating abstract ideas, but we’ve also come to a point where our most common encounter with ‘nature’ is in the supermarket.

Geddes and Tong discussed the fact that the book pivots around metaphors of blindness and invisibility in the human-animal relationship. One could feel a collective intake of breath in the room when Tong stated that we’ve made slaves of our domesticated animals. But she explained that this has come from commodifying nature to the point where we’ve placed a price on almost all species on the planet. Tong explained that this realization hit her as she wrote under a Baobab tree. At that moment, she fully understood the absurdity of the concept of ownership, especially with respect to these majestic trees that outlive us by thousands of years.

In conclusion, Tong asserted “life can’t be owned by anybody. Life belongs to life.” Yet this review is being prepared the same week that the United Nations released a report on biodiversity, claiming that extinction looms over one million species of plants and animals. When Geddes asked Tong about how she grappled with sad themes of climate change and species loss, she admitted that she had considered writing a piece about scientists when they are faced with the realization of what is to come. (Tong has met many crying scientists). But the conversation remained hopeful, in particular when Tong spoke of epiphany, wonder and awe, and the joy that we can find in being near animals. She reminded us that animal videos are all over social media, for better or for worse, almost as a salve for the stress of our misguided human lives.

Some questions from the audience touched on metaphysical interpretations of reality; others asked about Tong’s future projects. Listening to Ziya Tong, I felt anxious about the future of our planet, but also experienced a hopeful, delightful feeling - that feeling when one is in the presence of a person who can demonstrate the limits of our knowledge while inspiring us to learn more. Hopefully we have time to appreciate the fact that our human perspective of the world may not be as solid as we presume it to be. Listening to Tong may be just what many of us need in order to reevaluate our reality bubble, and to unlearn all we have learned.