The Courage to Choose Peace 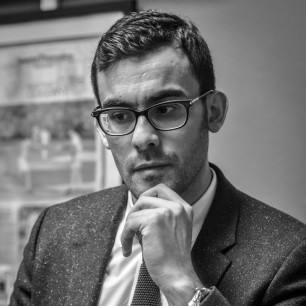 Yousef Bashir grew up in the Gaza Strip. He was only eleven years old when the second intifada broke out in 2000. His family home, the land his ancestors inhabited and farmed replete with lush date trees and crops for over 300 years, stood next to an Israeli settlement. When soldiers tried to evict the Bashir family from their ancestral home Yousef’s father Khalil refused to leave. “Khalil, take your children, they aren’t safe here,” the soldiers warned him. “If my children are not safe in their home, they are not safe anywhere,” he replied. Overnight, the Bashir home became a microcosm of the Israeli occupation. Soldiers entered the family household and occupied the top floor of the building. They divided the house into sections and strictly controlled movement and access to the building for the next five years.

Khalil Bashir’s outlook was continuously challenged on multiple fronts. The soldiers gradually encroached more on the family home. The men and boys had to be accompanied even to the bathroom, and the door had to remain open. Women and girls were permitted to close the door, but not to lock it. At night, the family would be rounded up on the first floor and locked in while soldiers occupied their bedrooms above. The upstairs floor of the house became an open toilet, with smells gradually seeping down to the lower levels. Soldiers destroyed the greenhouses that had provided the Bashir family sustenance and a living for many years, and they uprooted trees that had stood on the property for centuries. Once, the soldiers even targeted Khalil’s bedroom, showering him with gunfire, and shattering the room’s windows and ceiling. The elder Bashir had to be rushed to the emergency room in order to have pieces of glass taken from his head. In hospital, CNN journalist Ben Wedeman asked Khalil if these actions had made him ready to give up on peace, Khalil’s answer: “No. These actions make me believe in the need for peace even more.”

Still, young Yousef struggled with his father’s stance and often challenged him. This changed however one fateful day in 2004, shortly after Yousef’s fifteenth birthday. The family was receiving visitors from the United Nations. Shortly after giving permission for the UN visitors to enter the household, the Israeli soldier in charge changed his mind for no apparent reason and told everyone that they had to leave. Khalil and Yousef accompanied the UN delegates out to their car. As they approached the UN vehicle, Yousef heard a single resounding shot. He crumpled to the ground. The soldier had shot him in the back. “I went to the hospital,” Yousef said, “and I felt pain.” The pain told him he was still alive.

Yousef was rushed to a hospital in Tel Aviv where Israeli doctors healed him. He recounted how the doctors showed him a scale of happy faces and asked him to choose the level of his pain. Over the next year Israeli nurses patiently restored the paralyzed child back again to health, they made him believe in himself and helped him regain the ability to walk once more. The Israeli hospital stay led to cognitive dissonance for Yousef. He had only known the Israelis through the lens of the occupation, from the soldiers inside towers and later inside his home, from the settlers living warily across from him, but he had never had such a human connection with Israelis.

Human connection, realized Yousef, is what is needed most. Over the next months and years, Yousef would transform his views to become his father’s son, carrying on his legacy of being a spokesperson for peace. He says that forgiveness, like peace, is a process. It is a process that every day he wakes up and chooses to forgive. He chooses to forgive the soldier who shot him in the back as a child. Although his body is still racked by the pain of the bullets that entered his spine, still he chooses to follow the advice of his father and put his faith in peace, after all, as his father said to him, “you are a true Holylander, and that is what a Holylander does.” Building partitions and walls that destroy connection does not bring peace, says Yousef. The solution for peace is to respect the other as as a human being. This means respecting the inherent right to live equally, as a human being with dignity, to understand that ultimately both sides are connected to the land and to one another, and like his father, to have the courage to choose peace, over and over again.