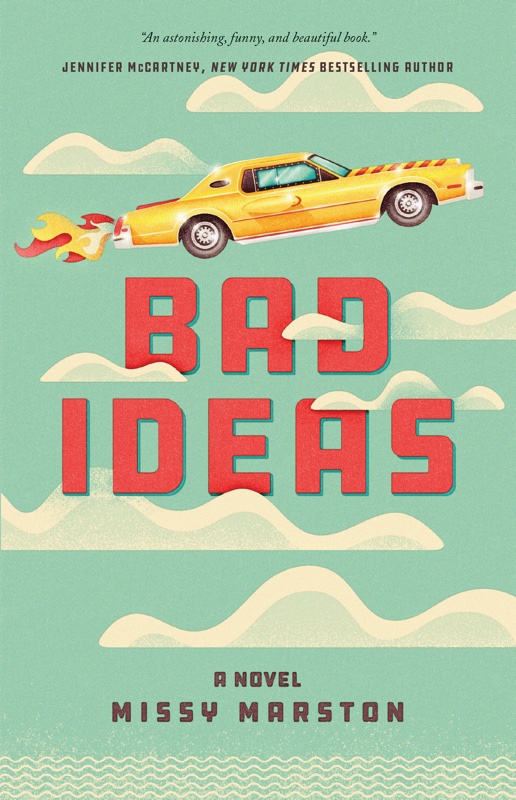 The launch of Missy Marston’s second novel, Bad Ideas, at the Manx Pub was definitely a good idea. The packed house included friends and fans of Marston’s award-winning debut novel of 2013, The Love Monster. At the May 5th event, Marston talked about the genesis of Bad Ideas.  Growing up in a small town on the St. Lawrence Seaway, Marston related, it was impossible not to hear about the Mad Canadian, Ken Carter. Carter spent three years preparing to jump a mile-wide segment of the St. Lawrence River in a rocket-powered Lincoln Continental, but was replaced at the last minute by an American, who only made it about 500 feet across.

It was also impossible to ignore the aftereffects of Inundation Day, July 1, 1958, when more than a dozen towns and hamlets of less than 1,000 people were flooded to create the St. Lawrence Seaway. Seaway construction wasn’t disruptive just because entire towns were moved or lost, but because the massive project saw 20,000 men, all young, mostly single, and far from home, flock to the area for work.

Bad Ideas explores the consequences of these two events from the point of view of its seven characters in the fictional town of Preston Mills.

Claire, a mother at 17 and a grandmother at 34, is a romantic who fell in love with and had two daughters by one of the married Seaway workers and continues to pine for him. “Inside Claire’s head was a running narrative, telling her story. The story of a princess abandoned and forgotten, mistaken for a scullery maid, biding her time, awaiting the return of her prince.”

Tammy is Claire’s younger daughter, pregnant at 16 but, like, the rest of Preston Mills, is in denial about many things, and abandons her daughter. Trudy, Claire’s older daughter, works the night shift at a local linen factory. Trudy is the kind of person Marston finds impressive—someone who shoulders huge responsibility at a tender age. Trudy works the night shift because her mother is working the day shift and the two of them have ended up raising Tammy’s daughter Mercy. And then there’s Jules Tremblay, a Montreal daredevil, who, like Ken Carter, dreams of building a ramp to jump the St. Lawrence in a rocket car, and who seems like a very bad, but absolutely irresistible, idea to Trudy.

With her characteristic wit, warmth, and humour, Marston explores the lives of people slowly drowning, those who didn’t manage to escape the confines of their tiny towns and whose dreams, perhaps small to begin with, are still bigger than their ability to realize them. As Marston pointed out, the flooding may have begun with a big bang on Inundation Day, but the water levels rose very slowly over the course of several days, and the consequences continued for months, as dead animals and the occupants of graves that hadn’t been relocated surfaced and floated to new locations.  As Mercy says, “This day at the fair didn’t turn out the way she thought it would. Sometimes it’s like that.”