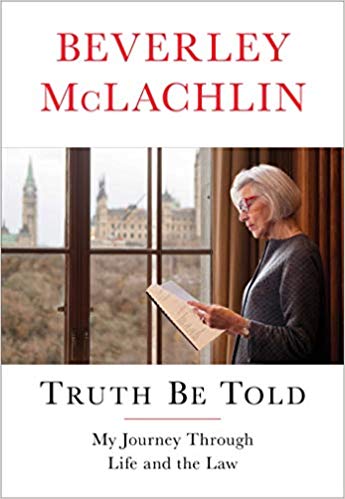 “I always marvel my life turned out that way,” said Beverley McLachlin. The former Chief Justice of the Supreme Court of Canada was speaking to an eager crowd present for the launch of her memoir Truth Be Told: My Journey Through Life and the Law, an event jointly organized by the Writers Festival, Library and Archives Canada and the Ottawa Public Library. Former clerks, young hopeful lawyers, and many other eminent guests, including the former Governor General of Canada David Johnston and his wife Sharon Johnston, all gathered to hear the former Chief Justice speak.

McLachlin spoke about her early years in Alberta, outlining the main events of her career as well as summarizing her landmark cases. McLachlin also reminisced about meetings with inspirational women like Sandra Day O’Connor and Hillary Clinton, as well as a formal dinner where she found herself seated next to her childhood hero, Queen Elizabeth II. McLachlin acknowledged her life path has been unusual. People often ask if she could have foreseen her future, McLachlin told her audience, her reply is always the same: “Never!" In McLachlin's early years, it would have been inconceivable to imagine someday she would be Chief Justice. When she was growing up, the only jobs available to women were teachers, secretaries, nurses, telephone operators, and receptionists.

McLachlin recounted how her own mother, Eleanora Gietz, had married young, as was typical of the time and place. Hardship befell Eleanora’s family during the Depression and she was unable to realize her dream of becoming a writer. After her marriage, Eleanora devoted all her energy and time to raising her own children. McLachlin described her mother in glowing terms as a “dynamic, empathetic, and marvellous person” and it is clear that Eleanora had an important impact on the development of Beverley McLachlin’s character, intellectual curiosity, and literary bent. McLachlin also recounted how her mother had prepared her for her first day of school, making her excited to spell her name for the first time, then repeating it over and over again, until she learned it. Both McLachlin’s mother and father loved literature and encouraged her reading habit. As a child, McLachlin devoured every book she could get from the library, leaving the confines of her small town in her mind’s eye and exploring the riches of ancient Egypt and the rest of the world through the library's treasure trove of fiction and non-fiction.

It was not always easy growing up isolated on a ranch in small Pincher Creek, Alberta. McLachlin addressed some of these challenges, sharing how she had endured periods of depression where she struggled even to walk across a room. She thought about ending her life. Overcoming her early experience with depression was her first real triumph in life, McLachlin acknowledged, noting that adolescence is a hard time for many. Choosing to write about her painful moments was a deliberate choice she made with the hope that she may help some other struggling teenager by showing it is possible to come through and be fine, that “there is a light at the end of the tunnel.” As McLachlin grew and moved forward in her life, she stayed focused on a singular vision: “I wanted to be in charge of my own destiny, and I wanted to use whatever small talents I had to the full,” she told her audience.

McLachlin believes it is important to help other young women to succeed as well, to be proactive in championing the next generation. Tell them they are good, she advised her listeners, hire them, give them confidence, and empower them in their work. Change is possible. Things in the world have to change, and the law is the way to do it said McLachlin. When you come up against unfairness in the world, “don’t let it stop you.” You may not be able to change other people’s attitudes, but you work around them and change will come.