Looking good in your genes: mutants, bullies, and milk 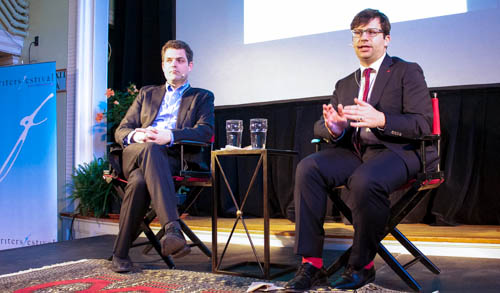 Most people with severe food allergies haven’t stopped to reflect on how their ancestors’ diets and behaviours got them to the point where they can enjoy a milkshake without severe physical repercussions.

But Dr. Sharon Moalem has.

The award-winning physician and New York Times best-selling author has spent years examining how our genes are in a state of constant change, and that while you may be preprogrammed for either failure or success with respect to specific circumstances, your biological wiring doesn’t necessarily determine your fate.

At a kickoff event for the spring edition of the Ottawa International Writers Festival, we had a full house to hear Dr. Moalem’s talk. While some might find it surprising that literary enthusiasts would rush to get a good seat for a speaker focusing heavily on science, that just means they aren’t familiar with Moalem’s approachable demeanour. Similar to his writing style, Moalem speaks without jargon, cracks plenty of jokes, and uses anecdotal evidence to support his studies and theories.

In short, Moalem is a university student’s dream professor.

Informative and entertaining, Moalem explained that the human genome is not as rigidly pre-set as the scientific community once thought. Mutants do not simply develop from cosmic radiation; and yet it may surprise you to learn that many of us are indeed mutants.

Make you nervous? It’s not so scary. A specific, evolutionary mutation is actually the reason why many humans can break down and digest milk into adulthood. Does that sound like you? Welcome to the club. (And no, the club is not the X-Men. If only.)

As Moalem explained from in his new book, Inheritance: How Our Genes Change Our Lives and Our Lives Change Our Genes , mutations, environmental factors, and lived experiences all have an impact on what kind of person we will ultimately become.

Human genes are able to support what Moalem refers to as, “annotations in the margins.” That means there is enough room for your genes to make notes about important events in your life that strongly impacted you, and to prepare you should they ever occur again.

After reading an excerpt of his book to the attendees, Moalem and event host Sean Wilson conducted a Q&A session with the audience. Among the diverse subtleties of genetics explored during the discussion, Moalem explained to the audience how traumatic events like experiencing severe bullying as a child, or a soldier developing post-traumatic stress disorder (PTSD) from combat are currently being studied to see whether the resulting certain genetic markers, or “annotations,” can be passed down from one generation to the next.

Studies with mice have shown that traumatic events can change the way mice behave. Moalem explained a study in which baby mice that were taken away from their mother on a regular basis experienced a form of PTSD and were more timid and less exploratory than mice that matured in a more stable environment.

A basic knowledge of psychology and many societal issues would indicate that such behaviour holds true for humans as well.

What remains to be revealed, is whether humans pass down certain behaviours to their children like the mice do: subsequent generations of the affected offspring exhibited similar timid behaviours as well. However scientists were able to avoid causing apprehension in the next generation of mice by administering a neutralizing drug in time.

Scientists want to know whether this could be done for traumatized humans as well, though since the amount of time between our generations is significantly longer, we’re left on a scientific cliffhanger until the next chapter is researched and written. We may have to wait longer to find out what happens next than fans waiting on George R. R. Martin ’s next book.

With his engaging writing and personality, Moalem has created a key opportunity for those literary enthusiasts with an interest in history, physiology, and human genetics to indulge their curiosity in an accessible and entertaining way. While you may not think you look good in your genes, chances are you may not even be aware of what kind you had to begin with, or what condition they’re in today.

Genes tell the story of your life, and you are the main character. Hopefully you find it to be a great read.