Lieberals and Harptards: An Evening with Scott Feschuk 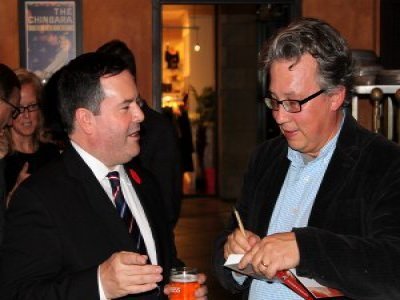 I only discovered Scott Feschuk’s writing in September. It was a fantastic article in Maclean’s that helped to get me hooked on Scott’s writing. Fast-forward two months and I am shaking his hand at the Metropolitan Brasserie,  talking about In The Loop  and joking about why my parents spelled my name the way they did.

Scott’s Tuesday night event was a showcase of his personality – smart, funny, and slightly irreverent.

The evening began with Tim Harper and Susan Delacourt reading segments from Chapter 4 of The Future and Why We Should Avoid It.  The year is 2021, and Prime Minister Rob Ford—played on Tuesday by Tim Harper—is delivering the Speech from the Throne with Governor General Busty McKnockers, as read by Susan Delacourt. This less-than-ideal future was brought to life for Tuesday night’s crowd as Tim Harper prophetically read, “I probably shouldn’t have got so drunk at the state funeral.”

This segment was followed by another reading. Not of the book, but a reading of real comments left on one of Scott’s articles. To highlight the insanity of Internet comments, they were read as a mock debate between Scott and Jason Kenney, Minister of Employment and Social Development. Jason Kenney took the Conservative position, sharing such brilliant words such as “lieberals.” Scott, meanwhile, counterpointed with the Liberal comments, eloquently calling out “Prime Minister Harptard.” Just hearing Jason Kenney utter the words “Scott Feceschuk” made the whole evening worthwhile.

The third and final segment of the evening was a musical rendition of Internet comments as performed by Ottawa a cappella group The Acafellas. “Send him to Ebolaland” almost sounds poetic when sung a cappela.

Like his writing, Scott brought a unique flavour to his Writers Festival event. The guest stars made the event a lot of fun for the seventy-or-so people in attendance. Scott’s wit was brought alive, even if he himself was barely at the mic. The event was also short enough to keep everyone’s attention span. Lasting less than an hour, Scott still managed to make the crowd laugh and give great insights into his style of writing. 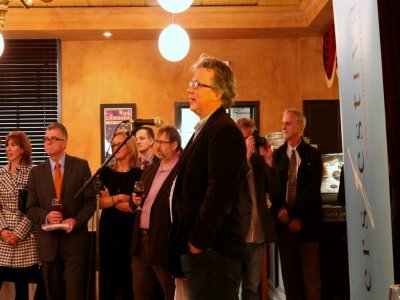