Getting a taste of Chef Michael Smith’s Kitchen 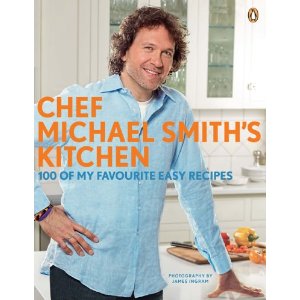 Chef Michael Smith is back on the shelves in time for Christmas with his newest cookbook, Chef Michael Smith’s Kitchen, 100 of My Favourite Easy Recipes. Filling his book with no-fuss directions and simple flavour punches, this is another addition to his collection that’s sure to please both the newly initiated and old-hand in the kitchen.

Ever encouraging us to relax in the kitchen, Michael Smith places emphasis on the joy of cooking rather than recipes themselves, and in turn suggests that through food, stories can be weaved. But instead of recounting the time he discovered caramelized chicken, or remembering his farmer friend who grows tomatoes in Tim Horton cups, Michael Smith encourages us, the readers, to form our own stories . This cookbook is our outline, and we are the ones who compose the narrative.

“Our food tastes best when we taste its story. When our cooking becomes personal, it grounds us to our community and connects us to life.” Encompassed within the creation stories, Michael Smith has hidden some big ideas amongst his 100 easy recipes. Tucked between his pages are cues for forming a connection at every stage of the meal: from meeting those who produce food, to the experience of cooking, to the joy of a dinner shared with friends of family.

This isn’t just a cookbook, for Michael Smith, it’s a philosophy for life. (Though he’s hidden his message of gathering, preparing and sharing next to food that looks so darnned good, I blame no one for becoming swept up with imagines of Raspberry Red Cabbage or Apple Pie Rice and failing to notice his championing of food as a catalyst to better living.)

One of Canada’s top chefs,  a host of several cooking shows, and with several cookbooks under his belt, Michael Smith has a dedicated following who store their spices in jars and love to keep things simple. In Chef Michael Smith’s Kitchen they’ll find familiar flavours mixed into new meals as Michael Smith puts forth 100 of his favourite newest recipes. (Including the concoctions produced on Iron Chef, so you can personally sample his food and decide who really won that battle.)

But with every cookbook the final word on quality (regardless of overlapping philosophy) is all down to the food. And it’s a pleasure to see that supporting his good ideas, the chef has infused his book with recipe after recipe of delicious yet simple meals. Selecting several items from Chef Michael Smith’s Kitchen we prepared and enjoyed a beautiful menu (which, listed below, will read like poetry to any writer or foodie):

Not only was the food “delish”, but it was simple (honest: it was easy and quick to prepare), with the majority of items already in our fridge and most of the recipes involving only a few key flavours. When Michael Smith says this cookbooks is for everyone, he truly means it. No master chefs are necessary, everyone who’s willing to pick up a teaspoon (or tablespoon, depending on quantity) can prepare some excellent food.

With the book divided into eight sections ranging from breakfast to salad to mains to treats, it’s quick to dip into the pages and retrieve a needed idea. The pictures are lovely and in themselves instructive, and the recipes are simple to follow. But it’s crucial to remember – as Chef Michael Smith consistently emphasizes – that the recipes are solely a starting point. What happens between reading the book and making the meal is up to you. Remember, this is all about building a story and connecting with the food. Experimentation, diversion, and adventure are encouraged.

My own story during this past Michael Smith (à la Catherine Brunelle) meal involves my grandmother who’s ninety-two asking for second helpings of the honey-glazed salmon, my aunt commandeering the book, to pour over recipes, and my husband high five-ing me on another awesome meal (after which I high-fived him on another awesome clean-up).  It involved time with family, and gathering around the dinner table. Ours was a good story with happy diners.

Following the chef’s tribute to those who “gather, prepare, and share food”, and cooking from the pages of his latest book, Chef Michael Smith’s Kitchen, 100 of My Favourite Easy Recipes,  he invites us readers (i.e. cooks) to become involved, try new ideas, connect with food, and give ourselves a break. Along with 100 recipes of simple deliciousness, how can this not be a cookbook for your shelves? It’s certainly found a place on mine.