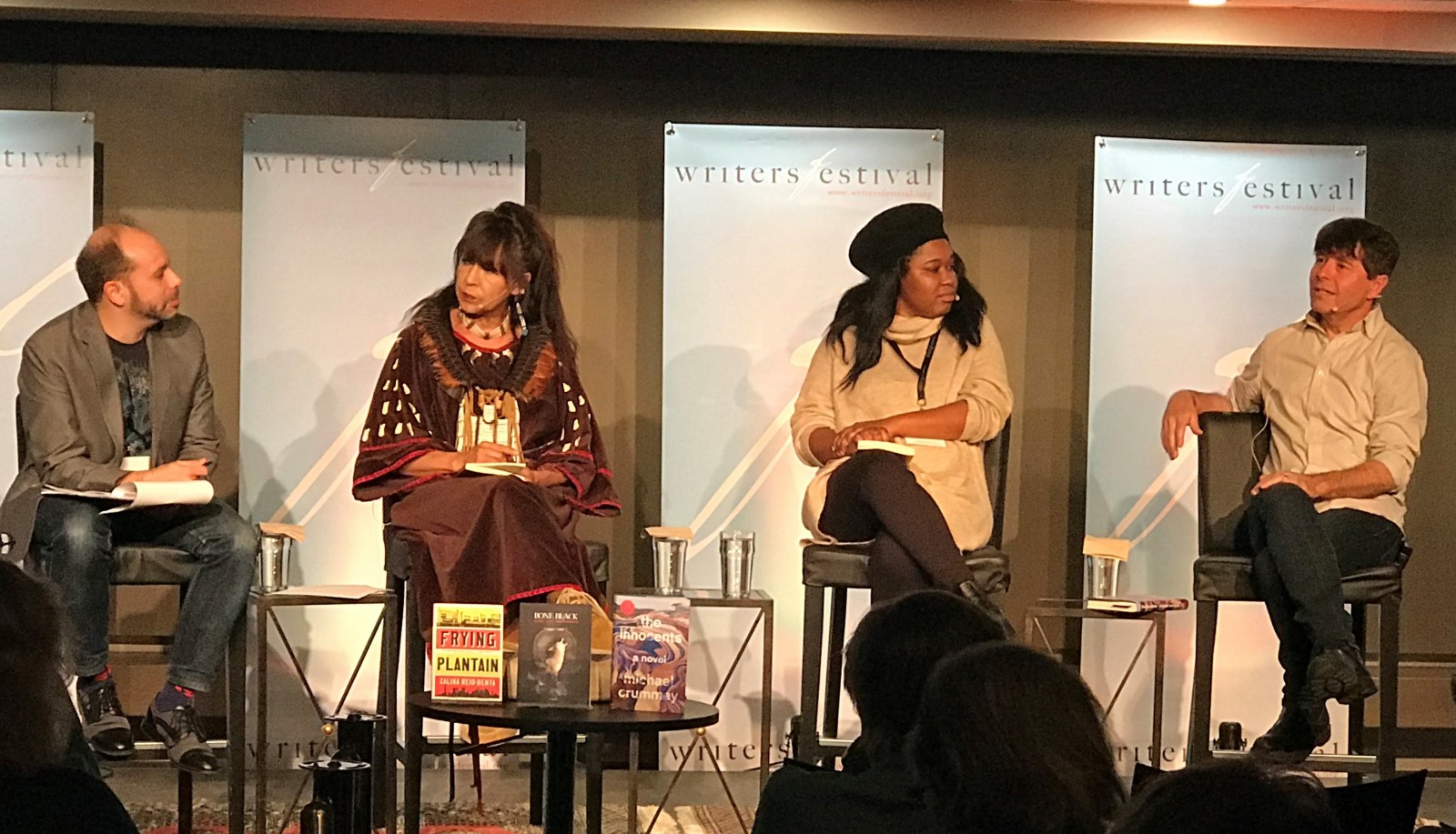 Family—that’s the common thread tying together the three books of fiction and their authors in this session moderated by the CBC’s Alan Neal.

In Michael Crummey’s The Innocents, a pair of young siblings become orphans and must make their way in an isolated world without adult guidance. It’s a story of hardship, survival and the bond between brother and sister, set in a geography that is strong enough to play its own character in the novel. The rocky shoreline of northern Newfoundland on the Atlantic Ocean is where the siblings call home. It’s an unpredictable setting that has robbed the pair of their other family members, including their youngest sibling. And yet the two orphans feel a sense of obligation to stay in their secluded home, indebted to those before them to maintain past traditions while growing into their own future.

In Carol Rose GoldenEagle’s Bone Black, an Indigenous woman decides to take justice into her own hands after her sister’s mysterious disappearance. Coming to the stark realization that her sister’s case is not an isolated one, the woman seeks to expose a broader crisis of missing and murdered Indigenous women. She does so by vowing to avenge their collective deaths and becoming a serial killer who targets the culprits in what she sees as a moral act of vigilantism.

Finally, Zalika Reid-Benta’s Frying Plantain offers a view into the life of a second-generation daughter growing up in Toronto’s Little Jamaica neighbourhood. Tensions arise with her mother and grandmother as the daughter comes into her own, and the book chronicles the protagonist’s journey from childhood to adolescence while also tackling cross-generational and cross-cultural experiences.

These are all cases of family relationships under challenging conditions. However, through these intimate family portraits, each of the authors aims to share a message larger than their family characters. For Michael Crummey, the surviving siblings’ obligation to the memory of their late sister demonstrates a long-standing practice in Newfoundland and Labrador. There, where communities continue to be resettled – people moving from remote to more accessible areas in the province – it’s commonplace for descendants of these resettled communities to return annually to tend to the local graveyard. There may no longer be any other recognizable structures, but the graveyards remain intact—signaling a deep respect for family tradition. Carol Rose GoldenEagle wrote out of a desire to draw attention to the ongoing crisis of murdered and missing Indigenous women in this country. She shares one of the women she had in mind as her story unfolded: Tina Fontaine, an Indigenous woman who was murdered in 2014, was found wrapped in a duvet cover in the Red River in Winnipeg. Fontaine’s case led to renewed calls for action on behalf of murdered and missing Indigenous women. And then there’s Zalika Reid-Benta, whose story went beyond family connections to personal and shared identity, race, immigration, and what it’s really like growing up as a racial minority in Canada.

When it comes to each writer’s motivation, family played an important role, though not necessarily a supportive one. Asked about her upbringing as a foster child, GoldenEagle says that although she is Cree from northern Saskatchewan, she was raised in an adoptive white family in southern Saskatchewan. She recalls having battled racism since her childhood, when neither her adoptive parents nor her teachers took her desires to write seriously. “Don’t be so stupid,” GoldenEagle recalls one adult saying. But she pursued her interests anyway, starting out in journalism before transitioning to authoring books. Meanwhile, Michael Crummey had the support of his family, but only when he finally told them he was interested in writing poetry and fiction. The news broke when Crummey won a prize in his fourth-year of university at Memorial University of Newfoundland. “All I wanted to do was write,” Crummey says. As for Reid-Benta, she credits her mother’s encouragement as a driving force in her writing. When Reid-Benta had opinions, she remembers, her mother encouraged her to put pen to paper. Family is a powerful driving force in all our lives, as each of these new novels clearly demonstrates.