Family and Memory with Emma Donoghue 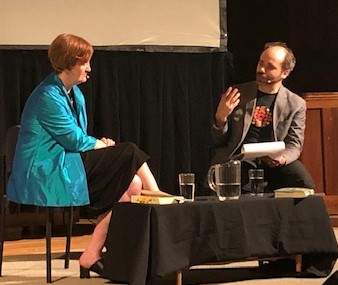 Charming, witty, and thoughtful are three words that all describe the exuberant personality of Emma Donoghue. A prolific wordsmith, she is as vibrant in person as her words are on the page. At Southminster United Church, attendees filtered into the space, eager and chatting excitedly to one another. One had heard from a friend that Donoghue was an excellent speaker. Another was attending an author event for the first time. The room was abuzz with conversation as the guests eagerly anticipated the renowned author’s entrance. Discussion host and CBC Radio personality Alan Neal of All in a Day walked into the room and took his seat at the front, clipboard in hand and smiling. Using Donoghue’s own words, Neal began to paint a picture of the author’s humour and skill. Quoting from her books, he hooked the audience from the onset before welcoming her to the stage.

Donoghue took her place wearing a vibrant turquoise jacket that shimmered in the church lights. All eyes were on her as the conversation opened on the topic of Donoghue’s children and how they are often the inspirational subjects behind the characters and scenes within her stories. What shone through above all else was the author’s boundless love for her children and her struggle to know and understand the connected world that they inhabit.

Akin, Donoghue’s latest novel, explores the intergenerational relationship between a boy and his great-uncle. The night’s conversation explored the contrast between the experiences of the young and the elderly. Neal posed questions about the benefits of these two varying perspectives and the inevitable generational divide, identifying age a cause for contention throughout her novel. Donoghue agreed, citing her own conversations with her kids as the inspiration for many of the scenes and dialogue in this new book. With a laugh and a wry smile, she admitted her own lack of experience with the technology her children use daily. Their experiences with video games change the very way that they interact with the world around them, she asserted, causing them to perceive events in less sequential and more expansive way. She examined  their outlook in an amused and awe-filled way, highlighting how incredibly different their interactions with the world are from her own.

The night was full of engaging dialogue and witty banter as author and host connected through a fast-paced and lively conversation. The idea of memory and perception came up time and time again as a central themes in Akin. Neal’s questions surrounded the idea of how we witness the world around us and whether or not we learn from the past or from others’ experiences. In response, Donoghue questioned whether memory can even be cited as a true source, as often what one believes to be a truthful memory may simply be something imagined and then taken as truth with the passage of time. Either way, she asserted, if a novel draws inspiration from memory, and memory is a key theme throughout, then all that truly matters is the pleasure and enjoyment derived from the story and the act of remembering as a whole.

Akin draws on many of Donoghue’s own experiences, including time spent living abroad with her family in Nice. Set in the French Riviera, Akin features characters who live the stories from Donoghue’s memories. Donoghue is a self-proclaimed observer and note-taker, and many details that she observed and meticulously chronicled made their way into the book. There’s no doubt that Akin is a vibrant read with its tactile, life-infused inspiration.

Indeed, it was a stimulating and witty conversation. Donoghue was quick to laugh and spoke openly and genuinely. Her candor and honesty about her home life kept the audience hooked until the end. Donoghue admitted that she writes as an escape and a relief. She is motivated to write primarily to find that one story that will satisfy her the most, and she finds joy in knowing that she has led others to feel something when they engage with her books. As she noted, “I want that moment of connection with a stranger.” Truly, it was a night of connection, forged through shared memory, lively discussion, and the pure joy of reading.