Blueprint of the Good Society 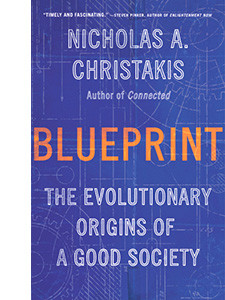 Human societies are fundamentally good. So argues Nicholas Christakis, author of Blueprint: The Evolutionary Origins of a Good Society. Trained as a palliative care physician and social scientist, Christakis now directs the Human Nature Lab at Yale University, where he is also Sterling Professor of Social and Natural Science. His new book Blueprint interweaves aspects of sociology, medicine, evolutionary biology, and ecology in an intense study of the human condition. At a time when truth and evidenced-based research are facing challenges as never before and dangerous half-truths rage on social media, Christakis’s carefully laid out, factual book offers an optimistic view on where humanity is headed next, grounded not in wishful thinking but in a what Christakis argues is a mountain of evidence-based truths.

The facts paint an optimistic picture, says Christakis. The fact that humans have evolved to live in society suggests that our being social carries evolutionary benefits. Influenced by the philosophy of Philippa Foot, who said, “In moral philosophy it is useful, I believe, to think about plants,” Christakis says that like plants, human societies need good roots to thrive. Human good is located in the roots that lead to human flourishing over time.  While it is tempting to hone in on the horrors of human history and get pulled into the pathos of hate, Christakis argues instead that human good and our propensity for cooperation are overwhelmingly engrained in us, socio-biologically.

Christakis and his team studied thousands of societies, intentional and non-intentional, across different times and places. They found that certain common features are salient across all of them. Christakis calls these nourishing principals the “Social Suite”: identity, love, friendship, networks, cooperation, in-group preference, mild hierarchy, and teaching. All of these functions arise out of our inter-individuality; i.e., our identity formation through our social interactions with one another. The Social Suite is what makes us essentially human.

These principals form a blueprint for the formation of human societies that is deeply, even genetically, ingrained. The attempt to suppress any of these instincts, such as engineering a society that suppresses love or freedom of association, as for example is undertaken by authoritarian regimes, cannot be engineered successfully, at least not forever. Christakis speaks from experience; he was just a boy when the military dictatorship was overthrown in his native Greece. Human society may be flawed says Christakis, but despite centuries of hatred and violence Christakis believes that society fundamentally leans towards the good. He backs this by science. He is optimistic about our common future because the long arc of our evolution says that the societal behaviours that will thrive are those that nourish us. Malice and vitriol will not last.

The horizon of humanity offers hope.