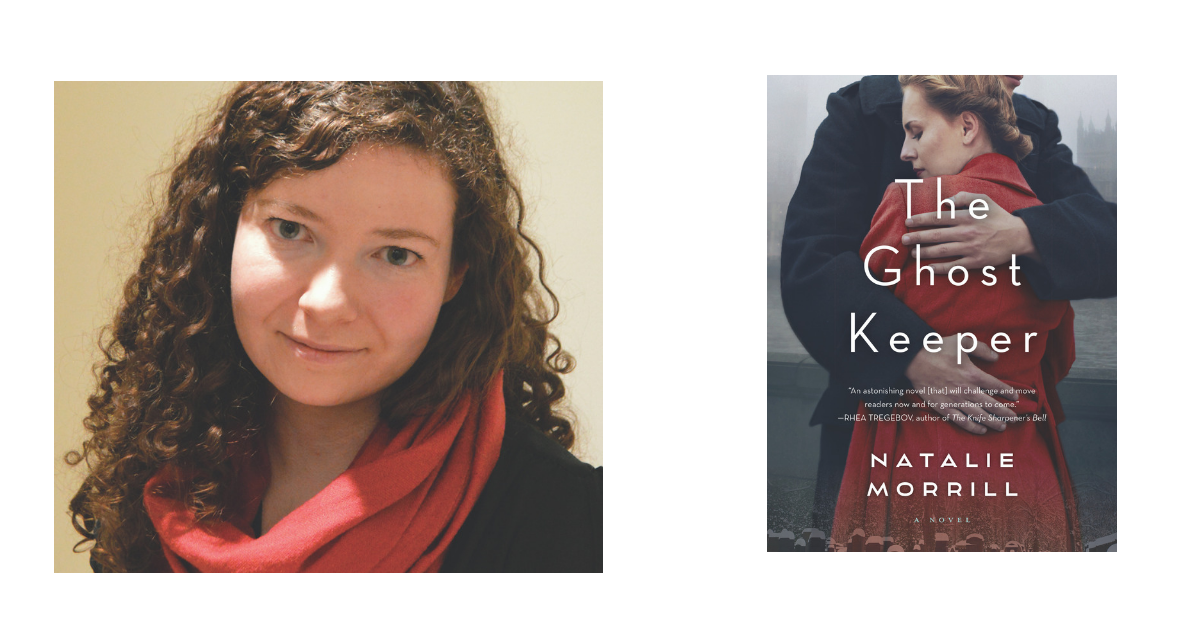 Natalie Morrill holds an MFA in creative writing from the University of British Columbia. Her fiction and poetry have been published in Canadian journals and included in The Journey Prize anthology. She lives in Ottawa, Canada. Her first novel, The Ghost Keeper, launched this year with HarperCollins. It’s a story about the terrible choices we make to survive and the powerful connections to communities and friends that define us. This sweeping novel set in Vienna during the 1930s and ’40s centres on a poignant love story and a friendship that ends in betrayal. Natalie will be joining the festival this year to talk about The Ghost Keeper and historical fiction with novelists Alix Hawley and Wayne Grady.

Congratulations on The Ghost Keeper’s two awards so far – the HarperCollinsPublishers/UBC Prize for Best New Fiction, and the Canadian Jewish Literary Award for Fiction. What was the writing and revision process like for this book?

It was long and fairly intensive. I started it as my thesis for my MFA program, and then I was lucky enough to have an editor at HarperCollins look at it about a year after. In the meantime I had finished another draft. They looked at it and they were interested but it still needed some key changes before they would feel good about accepting it. That was awesome because to hear from an editor that she couldn’t accept it unless I was working on certain things was a wake-up call that I needed. So I worked on it again for another six to eight months and then I got my agent and my editor.

The revision process at HarperCollins was also fairly intensive, which was amazing. It's sort of terrifying and intense in some ways, and it's a very emotional roller coaster. I felt like the book was very protected in that they weren't going to let it out until it was the way it was supposed to be. It was emotional when I thought it was done and then an editor would come back and say, oh but couldn't we make this even better. They pushed back the publication date a couple times, but ultimately I'm so pleased, I feel so fortunate that they were willing to do that. It was a really lovely experience.

You lived in Vienna, where most of The Ghost Keeper is set, when you were young. What about Vienna led you to choose it as a setting?

It was really specifically the Währing Cemetery, the cemetery that's very prominent in the book. It was very near to our house when I was growing up. It is as described, even in the opening scenes of the book. There's a brick wall around it with barbed wire and glass on top. The only times I ever saw inside it as a kid were when one of my parents would hold me up to see over the wall, and all the headstones were knocked over and overgrown with ivy and things. My parents also worked hard to explain why there was this very neglected Jewish cemetery in our neighborhood, and nobody to look after it, and it was locked up and there's graffiti all over it. It was around the same time that I was first starting to understand what the Holocaust was so I think I got them conflated in my head: like dead people buried in there, and the genocide that happened. Which is not accurate, it's a nineteenth century cemetery and there's not a direct literal connection in that way, but as I grew up I realized there's certainly a connection in the sense that it is neglected because the community isn't there anymore and the reason it looks like a prison with the barbed wire and stuff is because people do break in and do antisemitic graffiti and things. So there was something resonant there for me in terms of the image of it reflecting that history indirectly. And then out of that, I began thinking about the kind of characters who might be connected to that situation. Most of the story arose out of that.

This book follows the life of the main character, a Jewish man named Josef, before, during, and after the Holocaust. Recording and records of different kinds are a recurring motif throughout his life. Why is the process of recording so important in this story?

I guess like the reason Josef is telling the story is to get it out of himself and let it exist apart from himself in a written record. As he says, it’s to be able to “set it down” almost like to set down like a burden. So I was thinking about what it would mean to be able to put this down in writing as opposed to just carrying it as a memory, and how that might be connected to his sense of what grave markers stand for, and all kinds of written testimonies like that. Partly because of what he would be trying to commemorate, with people for whom there wasn't really any kind of material record of their passing.

I worked for a while as a writer-in-residence for an organization in Sudbury called the Northern Initiative for Social Action. It's based around peer support for members who have lived experience of mental illness. I was working on the book before that, but it definitely deepened my thinking about what it means to be able to record something that was difficult and traumatic, as opposed to just carrying it in yourself.

Josef is definitely a very spiritual character and I think that the act of turning the memory into written testimony is connected with his faith, connected with his understanding of how faith is passed on, and what it would mean to testify or to study written accounts of faith. I think it has a spiritual element for him in terms of processing the significance of various moments, as well as being able to allow himself to be seen, because he's kind of a character who naturally would prefer to disappear in some ways. So the act of setting it down and making everything very plain is like an act of like self-offering.

The Ghost Keeper is your debut book. Has publishing a book changed your writing process?

Oh my goodness, it might be too early days to know. I think having finished the revision process has probably refined my writing process in the sense that as I'm starting another book now I see problems arising ahead of time. Like, maybe I should do some more planning with this or that because those are the questions that are going to come up later, or I ask myself in the first draft the questions that I was asking in third or fourth drafts.

I try not to think too much about what my editor or my agent are expecting for the next book. I don't want to go off the rails, but as much as I need to be in love with the book and put myself into it for that many years, I am not just writing for myself but for other readers. So I do want it to be something that my editor and my agent are excited about. But I have to trust myself at this point that if I'm excited about the project then probably there's something in it.

You’ve written poetry as well as fiction, and the language in The Ghost Keeper is beautiful and sometimes very poetic. Do you think your poetry and prose writing influence each other?

In poetry, the opportunity to pay such careful attention to what language is doing and how each word is impacting the poem, I think it encourages a habit of mind, or of thoughtfulness, perhaps, that maybe prose writing doesn't always encourage in the same way.

The writers that I admire most do have that thoughtfulness about language, whether they're writing poetry or prose, and they're thinking about how language works and how the punctuation and grammar and diction influence the way the text works and the meaning of it. So if I'm allowed to think about those things and play with them, then of course why wouldn't I? It's super interesting and lovely and enriching. I think that's a characteristic of my interest in literature so it's probably always going to be there. It was wonderful to have a story where the voice gave me the opportunity to bring that out a bit more.

You have a background in biology as well as literature. Do you think your biology background has affected your approach to research?

It gave me a lot of my experience doing research. I think it was very helpful in terms of realizing how resourceful one could be in terms of making use of libraries and getting good at Google and things. You learn how to make as much as possible of the resources you have access to, whether that's in an academic setting, or that's in a public library, or contacting local experts. There are certain skills in terms of research, like getting the research and compiling it and checking facts and things. And then just understanding the way that sources quote each other is definitely helpful.

One piece of advice would be just to go for it, because I was really intimidated by it when I first started. I felt like I wasn't qualified somehow because I didn’t have a history degree or something, but I think if you're passionate about the project then you'll be willing to do the work that it takes to do justice to the project.

Something that I was told early on was that it's very easy to get caught up in the research so much that you don't really write. And it is possible to just go down rabbit hole after rabbit hole and just keep finding out about what kind of cloth people used for clothes at different points. It's not that that stuff isn't wonderful for the text, but it's definitely possible just to never get any writing done. The story is probably what the reader is there for, more than those historical details which they could probably get from a textbook. The research can come into it at different drafts.

At a fairly late draft, I realized that particular historical details would have been impossible. In the moment that I recognized that, it was terrifying. But very quickly it became a creativity prompt, like it was a little puzzle. As in, if I want to be faithful to this truth there has to be another way for me to work out this plot point. Then I ended up being a bit more creative about how that could work, which ends up making the book a bit better.

Knowledgeable and honest readers are such a gift if you can get them. Whether it's historians, whether it's people who have experience of a particular context or moment, that's completely invaluable. I wouldn't have written this book if I didn't have somebody who had edited a lot of Holocaust memoirs and could tell me along the way if she thought that I was doing it justice.

This interview has been edited for length and clarity.