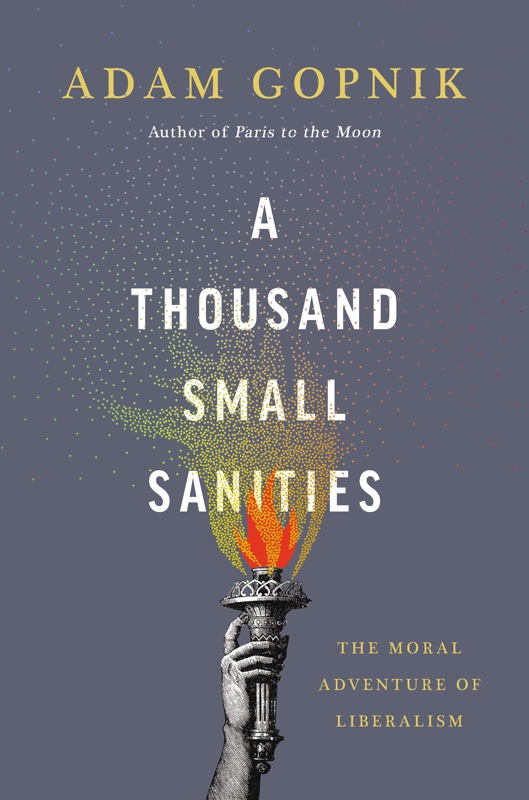 Adam Gopnik claims that he loves sentences more than anything in the world: aphoristic, pregnant, comic sentences. He may have noted other adjectives, but my pen could not scribble as quickly as he could articulate his ideas. Gopnik is a charismatic, if speedy, speaker, and his conversation with Peter Schneider revealed his distinctive mastery of language, history and political nuance. Gopnik, who also joined Schneider in conversation at the 2017 Writers Festival, spoke with candour and humour, demonstrating an intimate and versatile knowledge of the many historical and political issues raised by challenges to liberal democracy around the world. Gopnik also made a strong case for kindness and compassion.

Gopnik and Schneider opened the conversation by talking about Gopnik’s new book, A Thousand Small Sanities: The Moral Adventure of Liberalism. Gopnik had quickly decided that the book would be a short explanation of liberalism, as seen from both supporting and opposing views. Like Shakespeare, Gopnik hoped to understand and empathize with perspectives different from his own.

Gopnik and Schneider then segued into a variety of intriguing topics, including the paradox of social media;  Mordechai Richler’s disdain for empty pieties; Gopnik’s tour of Canada during the 2011 CBC Massey lectures; his mother-in-law’s work with the National Film Board; Mario Vargas Llosa’s portrayals of people slowly compromising their principles; the remarkable tradition of coexistence in Canada and the ways in which that coexistence has been translated into pluralist institutions; and finally, President Trump’s recent reception at the World Series in Washington DC. Gopnik explained that the baseball fans’ response to Trump was almost inevitable: a radical government will create radical opposition. But Trumpism cannot be defeated by the left or progressive factions if they set out to create an “other Trumpism,” Gopnik argued. Instead, he claimed the crowd should have chanted “lock him up, well, not really, but we want to turn the tables on you, and we want to do it with a certain amount of rhetorical irony...” acknowledging, that of course, such complex phrasing would have been difficult for a crowd to negotiate.

As the audience laughed, Gopnik also claimed that in order to be effective, liberal democracies must allow for constant intrusions on their collective conscience. They must, he argued, avoid amnesia about the negative aspects of their inheritance. With respect to Canada, Gopnik noted the mandatory land acknowledgement before Canadian cultural events, reasoning that this practice could be viewed as a kind of forced morality. Land acknowledgements may be something we say to feel better about ourselves, or they might prove that our collective conscience is alive. Either way, it is an important practice, because as citizens of liberal democracies, we need to constantly examine our capacity for doing wrong.

In the end, Gopnik made a strong case for the protection of liberal values and institutions. While a liberal perspective is challenging and requires grappling with inequities and “capitalist colonial cruelties,” it is in the end, Gopnik reasoned, responsible for the most pluralistic, open way of living the world has ever witnessed.

Gopnik concluded that although the liberal person will forever be embattled, she or he should heed the liberal credo, which goes something like this: “we will fight, but not violently, using political and non-political institutions to develop social trust and make the world slightly better, and in small increments, through change over generations...” As Gopnik said, never has an anthem been less inspiring or more awkwardly sung, but its flag must be raised high.