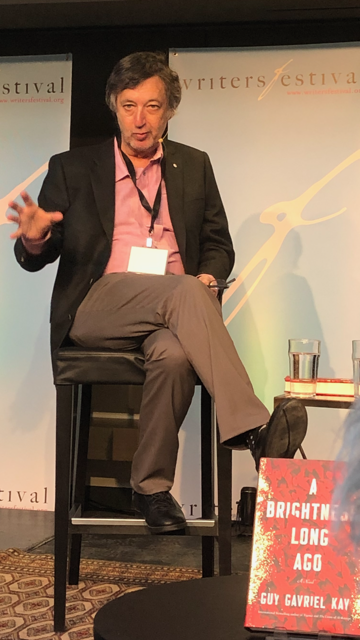 Ottawa book lovers who chose to come inside on a beautiful Sunday afternoon to attend Guy Gavriel Kay’s talk were not disappointed.  This was Kay’s sixth visit to the Writers Festival, and the packed room was evidence of his continuing popularity.

Brandon Crilly stepped up to introduce Kay, leading in with a preview of Kay’s latest book, A Brightness Long Ago. Crilly described how Kay manages to take a complex historical story, in this case from fifteenth-century Italy, and give it a quarter turn toward the fantastic.

As Kay approached the podium, he slid his reading glasses onto his nose, and began by saying that his sincere goal in writing was to reduce the gap between what was in his imagination and what ended up on the page. Kay read from an early scene where the character Adria Ripole first approached the chambers of the Beast. The room was silent as Kay spun his tale. Just as the intensity was rising, Kay chuckled saying, “and because I’m a really mean person…” and he closed the book. The audience breathed a collective sigh and laughed along with him.

In the interview between Crilly and Kay that followed, Kay responded with candour to questions about his process and the struggles he faces as a writer.  He has a horror of being bored by his own writing, which challenges him to reach for the uncertain and to write about different historical periods. Research being so important to him, he often takes three or four years to publish a new book, and he thanked the audience sincerely for their patience. (As a side note, he spoke of the pressure on writers to publish a new book each year).

Speaking of the research process which preceded A Brightness Long Ago, Kay explained how thrilled he had been to discover examples of Renaissance women who were unwilling to accept the role foisted on them by society. He wanted a protagonist who was historically accurate, not a twentieth-century protagonist thrust into a historical setting. Kay highlighted his fascination with the many parallels which can be found between the past and the present, noting at the same time how strange the past can be. Thus, Kay often introduces an element of the fantastic in order to put the reader right smack in the middle of the world as they understood it in the past. He quoted the oft-repeated aphorism, “History doesn’t repeat itself, but it often rhymes.”

Kay spoke with humour as he finished up his talk, saying how he was “brutally at the mercy” of his own self-consciousness, and that he did not know what was next. He spoke to writers in the audience, candidly discussing his constant anxiety during the writing process and his fear that he wouldn’t be able to portray all that was in his head in a way that was meaningful to the reader. He did admit, however, that in this case he’d done a fine job. The audience laughed with him again.

It was a special privilege to be able to purchase “A Brightness Long Ago,” ahead of its release date of May 14th. Many of the audience lined up to have him sign their books, this reviewer included.