419: One on one with Will Ferguson 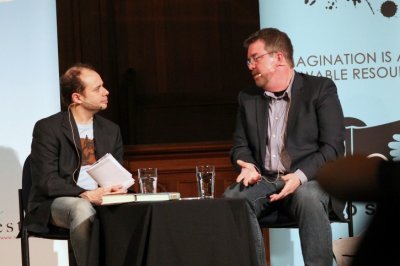 Settling into my seat at Southminster United Church felt vaguely reminiscent of being on an airplane, which is oddly appropriate, given our guest of honour’s history of travel writing. After a brief introduction by Alan Neal, host of CBC’s All in a Day, we welcomed author Will Ferguson, three-time winner of the Leacock Medal for Humour and the 2012 recipient of the Scotiabank Giller Prize. We were certainly in for a treat.

As a preamble: Ferguson had spoken with Neal in studio at his CBC Radio One show All In A Day; an interview worth your listen.

I admit that, prior to my attendance at this event, my knowledge of Will Ferguson was limited to knowing that he is a Canadian travel and humour writer, and that he had attended the same high school as my husband. Clearly, I had much to learn. 419 , Ferguson’s most recent publication and the focus of tonight’s event, has been alleged by some to be a departure from his previous works. As anyone who has read Ferguson’s other works will surely attest, 419 is not really a departure. Rather, 419 takes readers to a place where pain exists, and—unlike a favourite story of Ferguson’s son—there are no more friendly ducks of childhood visiting to cheer us up.

Ferguson opened the evening by reading from both Canadian Pie and 419. The selection from Canadian Pie, a non-fiction anthology of Ferguson’s writing, reminds us that the Hardy Boys are a very different entity for a ten-year-old than they are for an adult. It only took a few short minutes for Ferguson to get hearty and frequent laughs out of everyone present, which proves even more so that he is greatly talented in crafting—sometimes humourous—stories from the everyday stuff of life.

One of the things I enjoyed most about this event was the depth with which Alan Neal delved into Ferguson’s writing process. Once upon a time, I was a student of literature, and all these questions of process are encouraging for the rest of us. Ferguson tells that his first idea for 419 was a “what if?” about Internet scams; namely, what if somebody tried to get their money back? I find it absolutely marvelous that a seemingly simple question can take us through stories and places as vast and complex as those of 419.

The biggest question asked by Ferguson through 419 is, however, would you kill for your child? This is the thread that draws Ferguson’s non-fiction humour pieces into 419; the love and struggles of parenting and relationships.

Near the end of the evening, Ferguson spoke of a conversation he had with a Nigerian man after 419 was published. Apparently, the man was surprised by how accurately Ferguson portrayed family in his book, to which Ferguson replied, “family is the same.” Ferguson is an expert at converting simple, common elements of story into dark and wonderful fiction.

I must admit, I made the distinct error of showing up at tonight’s event having not read Ferguson’s most recent title. Now, as I wade through the mires of near-overdue library books, I am certainly adding 419 to the top of my ‘to read’ pile. The last time Ferguson was in Ottawa for the Writers Festival was for its fifth anniversary on September 12th, 2001. Here’s hoping that his next appearance at the Festival is in much less than a dozen years!