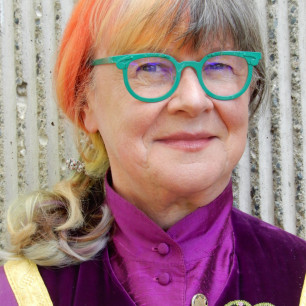 Shelagh Rogers is a veteran broadcast-journalist at CBC Radio. This is her 43rd year at the CBC and in a press release about all those years, a publicist added an extra zero, so it became “Shelagh Rogers has been at the CBC for 430 years”. Through those centuries, she has hosted current affairs shows, arts programs, and she has worked with legendary colleagues such as her mentor and friend, Peter Gzowski. In 2011, Shelagh was inducted into the Order of Canada. Also that year, she was named an honorary witness for the Truth and Reconciliation Commission. Shelagh is the inaugural recipient of the Margaret Trudeau Award for Mental Health Advocacy, and she was the 2022 Symons Medallist. She is a member of the Métis Nation of Greater Victoria. Since 2008, she has been the host and co-producer of The Next Chapter, the national radio program devoted to writing in Canada. Louise Penny has been a frequent guest and Shelagh lunges for any opportunity to speak with her. Luckily, with the Gamache series, it’s been at least annual for quite some time! Over the years, Louise has become one of Shelagh’s closest friends and will be her next spouse.