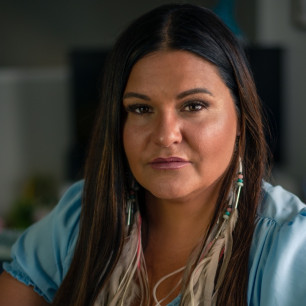 BRANDI MORIN is an award-winning French/Cree/Iroquois journalist from Treaty 6, Alberta, Canada. For the last ten years Brandi has specialized in sharing Indigenous stories, which have influenced reconciliation in Canada’s political, cultural, and social environments. She is one of Canada’s most prominent voices on Indigenous issues. Morin has published or broadcast with the New York Times, National Geographic, the Guardian, the Toronto Star, Al Jazeera English, Vice, Elle Canada, CBC’s Power & Politics, and the Aboriginal Peoples Television Network National News, among many other outlets. She won a Human Rights Reporting award from the Canadian Association of Journalists for her work with the CBC’s Beyond 94 project tracking the progress of the Truth and Reconciliation Commission’s Calls to Action. She has worked with Journalists for Human Rights and has presented to various university campuses in Canada and the United States regarding her work as an Indigenous journalist and is in high demand for commentary and expertise on Indigenous topics.