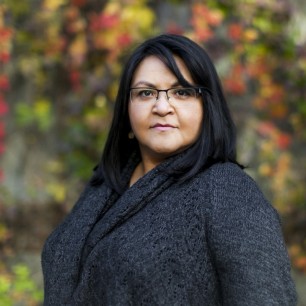 Haisla/Heiltsuk novelist Eden Robinson is the author of a collection of short stories written when she was a Goth called Traplines, which won the Winifred Holtby Prize in the UK. Her two previous novels, Monkey Beach and Blood Sports, were written before she discovered she was gluten-intolerant and tend to be quite grim, the latter being especially gruesome because half-way through writing the manuscript, Robinson gave up a two-pack a day cigarette habit and the more she suffered, the more her characters suffered. Monkey Beach won the Ethel Wilson Fiction Prize and was a finalist for the Giller Prize and the Governor General's Award for Fiction. Son of a Trickster was written under the influence of pan-fried tofu and nutritional yeast, which may explain things but probably doesn't. The author lives in Kitimat, BC.