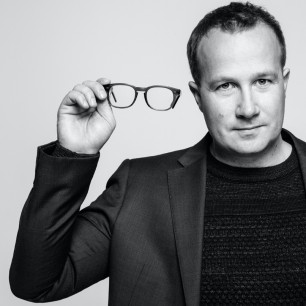 Andri Snær Magnason is an Icelandic writer, born in Reykjavik on the 14th of July 1973. Andri has written novels, poetry, plays, short stories, essays and films. He studied Icelandic literature at the University of Iceland. His novel LoveStar got a Philip K. Dick Special Citation, the Grand Prix de l’Imaginaire in France, and “Novel of The Year” in Iceland. The Story of the Blue Planet was the first children’s book to receive the Icelandic Literary Award and has been published or performed in 35 countries. The Story of the Blue Planet received the Janusz Korczak Honorary Award in Poland 2000. Andri has collaborated with various artists. He has been active in the fight for preserving the nature of Iceland. His book Dreamland: A Self Help Manual for a Frightened Nation takes on these issues and has sold more than 20,000 copies in Iceland. He co directed Dreamland, a feature-length documentary film based on the book. Footage from an interview with Andri can be seen in the Oscar Award winning documentary Inside Job by Charles Ferguson. His most recent book, The Casket of Time, has now been published in about 10 languages and was nominated as the best fantasy book in Finland in 2016, along with books by Ursula K. le Guin and David Mitchell. Andri Snær lives in Reykjavík with his wife Margrét, and four children.