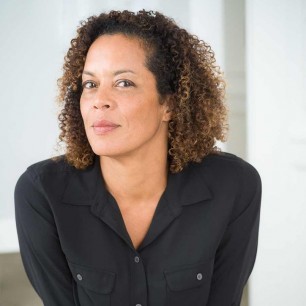 Aminatta Forna was born in Scotland, raised in Sierra Leone and Great Britain and spent periods of her childhood in Iran, Thailand and Zambia. She is the award-winning author of the novels Happiness, The Hired Man, The Memory of Love and Ancestor Stones, and a memoir The Devil that Danced on the Water, and the forthcoming essay collection, The Window Seat: Notes from a Life in Motion.

Aminatta’s books have been translated into twenty two languages. Her essays have appeared in Freeman’s, Granta, The Guardian, LitHub, The Nation, The New York Review of Books, The Observer and Vogue. She has written stories for BBC radio and written and presented television documentaries including “The Lost Libraries of Timbuktu” (BBC Television, 2009) and “Girl Rising” (CNN, 2013).

Aminatta is a Fellow of the Royal Society of Literature and a member of the Folio Academy. She has acted as judge for the Samuel Johnson Prize, the Bailey Prize for Women’s Fiction, the Sunday Times EFG Short Story Award, the Caine Prize and the International Man Booker Prize.

In 2003 Aminatta established the Rogbonko Project to build a school in a village in Sierra Leone. The charity has also run a number of projects in the spheres of adult education, sanitation and maternal health.

Aminatta is the recipient of a Windham Campbell Award from Yale University, has won the Commonwealth Writers’ Prize Best Book Award 2011, a Hurston Wright Legacy Award the Liberaturpreis in Germany and the Aidoo-Snyder Book Prize. She has been a finalist for the Neustadt Prize for Literature, the Orange Prize for Fiction, the IMPAC Award and the Warwick Prize. Aminatta Forna was made OBE in the Queen’s New Year’s Honours 2017. She is Director of the Lannan Center for Poetics and Social Practice at Georgetown University and Professor of Creative Writing at Bath Spa University and currently a judge for the 2019 Giller Prize. Happiness was short-listed for the Ondaatje Prize, the Jhalak Prize, and nominated for the European Prize for Fiction.