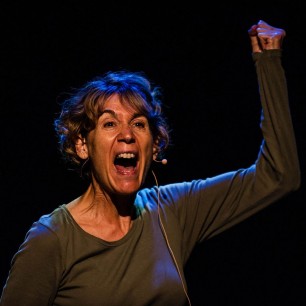 Born and raised in Buenos Aires, Argentina, Marta put down roots in Ottawa after one workshop with the Ottawa StoryTellers. Seventeen Ottawa winters later, she is a teller to watch: her performances are said to leave audiences spellbound. The crowning achievement of her ensemble work is the Ottawa StoryTellers’ 12-hour epic performances of The Odyssey (2012) and The Iliad (2014) at Ottawa’s National Arts Centre. Her solo shows, brave literary experiences that weave memoir with Argentina’s public past, are her signature work. Landscapes of Silence (2011), funded by the City of Ottawa, was produced and toured by 2WP. The Geography Teacher’s Orders (2018), funded by the City of Ottawa and the Ontario Arts Council (2016), won BEST OF FEST and JURY’S CHOICE AWARD OF EXCELLENCE at the 2018 Ottawa Fringe Festival. Known for its poetic language and emotional impact, the cinematic force of Marta’s solo work comes from the old folktales and fairytales that underpin the core of her practice.