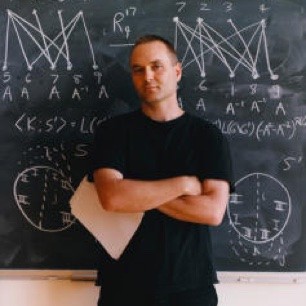 Dr. John Mighton is a mathematician, author, playwright, and the founder of JUMP Math. He tirelessly volunteers his time and expertise at JUMP Math as the lead curriculum developer for the JUMP Math Student Assessment and Practice Books and Teacher's Resources. He also donates all proceeds from publications to JUMP Math.

John completed a Ph.D. in mathematics at the University of Toronto and was awarded an NSERC fellowship for postdoctoral research in knot and graph theory. He is currently a Fellow of the Fields Institute for Research in Mathematical Sciences and has also taught mathematics at the University of Toronto. John also lectured in philosophy at McMaster University, where he received a Masters in philosophy.

John almost failed first-year Calculus in university, but his love of math and his belief that everyone has great mathematical potential led him to found JUMP Math as a kitchen-table tutoring group in 1998. His national best-selling book, The Myth of Ability: Nurturing Mathematical Talent in Every Child , describes his successes with JUMP Math, and how anyone can learn and teach math. In May 2007 John released a follow-up book to The Myth of Ability called The End of Ignorance , the most up-to-date account of the JUMP Math philosophy and methods.

John is also a playwright: his plays have been performed across Canada, Europe, Japan, and the United States. He has won several national awards including the Governor General's Literary Award for Drama, the Dora Award, the Chalmers Award and the Siminovitch Prize. His play Possible Worlds was made into a full-length feature film by Robert Lepage, with whom he is currently adapting Brian Greene’s book The Elegant Universe. John's most recent play The Little Years , which confronts the impact of chauvinism on children's potential, has just been published.

As a mathematician and a playwright, John believes that there are more connections between the arts and the sciences than people generally think, and that scientists and mathematicians are often led by a sense of beauty or elegance, and describe their work in artistic terms. He has made the statement, "If the two worlds communicated more, we'd have much richer art and science as a result."

John has given hundreds of talks and training sessions to parents and educators. He was invited to give the Neurenberg Lecture at the University of Western Ontario, the Hagey Lecture at the University of Waterloo, and a Public Lecture (broadcast by TVO) at the Perimeter Institute. John also delivered a keynote at the Aspen Brain Forum at the invitation of The New York Academy of Sciences.

In 2004, John was granted a prestigious Ashoka Fellowship as a social entrepreneur for his work in fostering numeracy and building young children's self-confidence through JUMP Math. John has received three honorary doctorates in recognition of his lifetime achievements and was named an Officer of the Order of Canada in 2010.

Shop locally if you can: Books by John Mighton are available from Perfect Books.