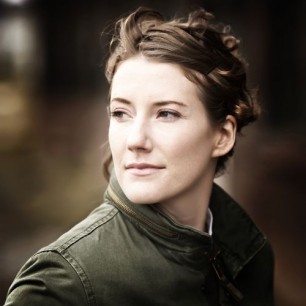 When Canadian singer-songwriter Kathleen Edwards released her debut Failer, she went directly to the top shelf of celebrated alt-country artists, when people were still calling it that. Whatever that shelf is called today, she remains there, in spite and because of not giving a damn what everyone else thinks. Swaying between rock-and-roll slur and heart-breaking songbird, her instantly recognizable soprano is like a human pedal steel. She plays the fiddle, loves dogs, and if you steal her 1957 Les Paul, she will find it––and you. Her work has solidified her as of the rare artists who has achieved both commercial and critical success: Her songs “Six O’Clock News,” “Hockey Skates,” “Back to Me,” “Change the Sheets,” and others charmed radio. Now for the obligatory trophy count: In 2008, Edwards’ album Asking for Flowers was shortlisted for the Polaris Music Prize. Four years later, the album Voyageur was another Polaris Music Prize finalist, while the gut-punching single “Soft Place to Land” won the prestigious SOCAN Songwriting Prize. (Are you writing this all down?) She has released four carefully-crafted albums over the course of her career, and each one has garnered Juno Awards nominations in Album of the Year categories and three Songwriter of the Year Juno nods. Then, Edwards strolled away to hide in plain sight, opening and running an Ottawa coffee shop dubbed Quitters. But listen: The self-made vagabond has started writing new music for a long-awaited album number five. Lucky us.