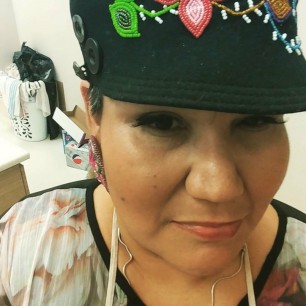 Colleen Hele- Cardinal is co-founder and Executive Director of the National Indigenous Survivors of Child Welfare Network. She is nehiyaw iskwew from Saddle Lake First Nation, AB but adopted and raised in Sault Ste Marie ON. She has worked diligently to raise the issue of the 60s scoop as well as build community, support for 60s scoop survivors and bring international attention to the displacement and loss of identity 60s scoop survivors have experienced.

She has successfully organized four national gatherings for 60’s scoop survivors She speaks publicly and candidly about murdered and missing Indigenous women and the impacts of the 60’s Scoop drawing critical connections between genocidal colonial child welfare removal policies and her lived experiences and those of women in her family. Colleen continues to volunteer with several initiatives, including Families of sisters in Spirit and the Nobel Women’s Initiative Sister to Sister Mentorship program to address gender-based violence, while giving context on the making of Canada, treaty relationships and the dehumanization of Indigenous people through policy and media. She is the author of the much anticipated Ohpikiihaakan-ohpihmeh (Raised somewhere else): A 60s Scoop Adoptee’s Story of Coming Home, which was released this past June through Rosewood Press. Colleen was recently was awarded the Ontario Premiers Award in November 2018 for Outstanding Community work in her field and the 2019 CBC Trail Blazer award and as well as currently spear heading an innovative GIS mapping project Mapping the Indigenous Adoptee Disapora with the Pe-k?w?win Project.

Most importantly Colleen is the proud mother of four grown children and enjoys spending all her free time with her granddaughters.