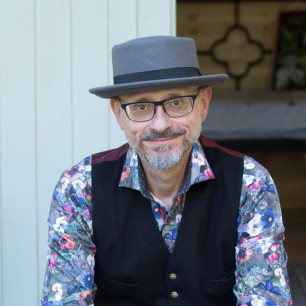 Richard-Yves Sitoski (he/him) is a songwriter, performance poet, visual artist, and the 2019-2023 Poet Laureate of Owen Sound, on the territory of the Saugeen Ojibway Nation (the Chippewas of Saugeen and the Chippewas of Nawash Unceded First Nation). He grew up in a minuscule forgotten suburb on Merivale Road that is likely to be swallowed up by Barrhaven within the next 15 minutes. His poems have appeared or are forthcoming in Prairie Fire, Train, The Fiddlehead, Bywords.ca, and The Maynard. He is the 2021 John Newlove Award winner and a 2021 Best of the Net nominee. Most recently, with Penn Kemp he co-edited Poems in Response to Peril: An Anthology in Support of Ukraine. When not chasing his impossible cat, he uses guitars to make sounds unheard since the Cretaceous as part of an indie folk duo with his wife Mary.