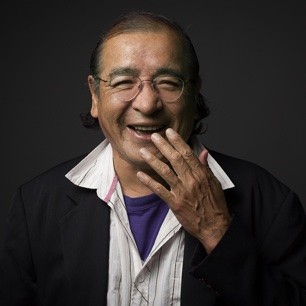 Tomson Highway was born in a snow bank on the Manitoba/Nunavut border to a family of nomadic caribou hunters. He had the great privilege of growing up in two languages, neither of which was French or English; they were Cree, his mother tongue, and Dene, the language of the neighbouring "nation," a people with whom they roamed and hunted.

Today, he enjoys an international career as playwright, novelist, and pianist/songwriter. His best known works are the plays, "THE REZ SISTERS," "DRY LIPS OUGHTA MOVE TO KAPUSKASING," "ROSE," "ERNESTINE SHUSWAP GETS HER TROUT," and the best-selling novel, "KISS OF THE FUR QUEEN." For many years, he ran Canada's premiere Native theatre company, Native Earth Performing Arts (based in Toronto), out of which has emerged an entire generation of professional Native playwrights, actors and, more indirectly, the many other Native theatre companies that now dot the country.

In 2013, he published his most recent play, "The (Post) Mistress; a One-Woman Musical" and released the accompanying Juno-nominated album, "Patricia Cano Sings Songs from 'The (Post) Mistress’.” As an accomplished jazz pianist, he recently played Koerner Hall and opened the 2017 Luminato Festival with his Cree Cabaret. He divides his time between his cottage in northern Ontario (near Sudbury, from whence comes his partner of 32 years) and Gatineau, Québec.