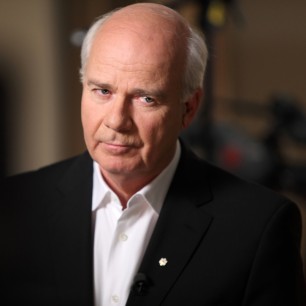 Peter Mansbridge is one of Canada’s most respected journalists. He is the former chief correspondent for CBC News; anchor of The National, CBC’s flagship nightly newscast where he worked for thirty years reporting on national and international news stories; and host of Mansbridge One on One. He has received over a dozen national awards for broadcast excellence, including a lifetime achievement award from the Academy of Canadian Cinema & Television. He is a distinguished fellow of the Munk School of Global Affairs & Public Policy at the University of Toronto and the former two-term Chancellor of Mount Allison University. In 2008, he was made an Officer of the Order of Canada—the country’s highest civilian honour—and in 2012 he was awarded the Queen Elizabeth II Diamond Jubilee Medal. He is the author of the instant #1 national bestseller Extraordinary Canadians and also the national bestseller Peter Mansbridge One on One: Favourite Conversations and the Stories Behind Them. He lives in Stratford, Ontario. Follow him on Twitter @PeterMansbridge, visit him at ThePeterMansbridge.com, or listen to his daily podcast, The Bridge, with Sirius XM Canada.