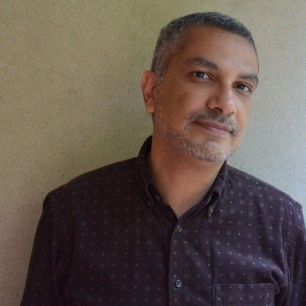 Kamal Al-Solaylee is the author of the nationally bestselling memoir Intolerable: A Memoir of Extremes, which won the 2013 Toronto Book Award and was a finalist for the CBC’s Canada Reads, as well as the Hilary Weston Writers’ Trust Prize for Nonfiction. His second book, Brown: What Being Brown in the World Today Means (to Everyone), was hailed as “brilliant” by the Walrus magazine and “essential reading” by the Globe and Mail. A finalist for the Governor General’s Literary Award for Nonfiction as well as the Trillium Book Award, Brown won the Shaughnessy Cohen Prize for Political Writing. A two-time finalist for the National Magazine Awards, Al-Solaylee won a gold medal for his column in Sharp in 2019. He holds a Ph.D. in English and is Director of the School of Journalism, Writing, and Media at the University of British Columbia.