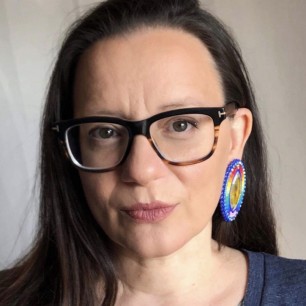 Cherie Dimaline is a member of the Georgian Bay Metis Community in Ontario who has published five books. Her most recent novel Empire of Wild became an instant Canadian bestseller and was named Indigo's #1 Best Book of 2019, and has been recently featured in The New York Times, The New Yorker, The Chicago Review of Books, goop!,and Shondalands. Cherie lives in Ontario, on her ancestral grounds, where she is working on a new (unrelated) YA book, her next adult novel, as well as the forthcoming TV adaptations for The Marrow Thieves and Empire of Wild. Her latest book, a follow up to The Marrow Thieves, is Hunting by Stars.