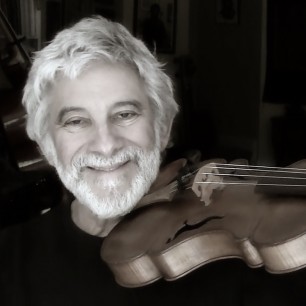 Stephen Nachmanovitch is the author of two books on the creative process, The Art of Is (2019) and Free Play (1990). He performs and teaches internationally as an improvisational violinist and at the intersections of performing arts, multimedia, humanities, ecology, and philosophy. Born in 1950, he graduated in 1971 from Harvard and in 1975 from the University of California, where he earned a Ph.D. in the History of Consciousness for an exploration of William Blake. His mentor was the anthropologist and philosopher Gregory Bateson. He has taught and lectured in many countries on creativity and the spiritual and social underpinnings of art. In the 1970s he was a pioneer in free improvisation on violin, viola and electric violin. He has presented master classes and workshops at many conservatories and universities, and has had numerous appearances on radio, television, and at music and theater festivals. He has collaborated with other artists in media including music, dance, theater, and film, and has developed programs melding art, music, literature, and computer technology. He has published articles in a variety of fields since 1966 and has created computer software including The World Music Menu and Visual Music Tone Painter. He has been a student and practitioner of Buddhism for over 40 years and integrates into his teaching a Zen approach to creativity. Nachmanovitch continues to teach, write, and perform, and ways to extend ideas about the ecology of mind into the 21st century. He lives with his family in Charlottesville, Virginia.