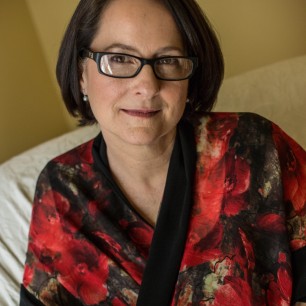 Shaena Lambert is the author of the novel, Radiance and two books of stories, Oh, My Darling and The Falling Woman, all of which were Globe and Mail best books of the year. Her fiction has been published to critical acclaim in Canada, the UK and Germany and has been nominated for the Rogers Writers' Trust Fiction Prize, the Ethel Wilson Fiction Prize, the Evergreen Award, the Danuta Gleed Award and the Frank O'Connor Award for the Short Story. Her stories have been chosen four times for Best Canadian Stories, and have appeared in many publications, including The Walrus, Zoetrope: All Story, Ploughshares, The Journey Prize Anthology and Toronto Life.

A dedicated environmentalist and climate activist, Shaena was arrested twice on Burnaby Mountain for crossing a police barrier, to protest the building of the TransMountain oil pipeline from the Alberta tar sands, and continues to actively oppose oil pipelines, logging of old growth, and other policies leading to climate change and environmental destruction.

Her most recent novel is Petra, inspired by the activist and green party founder Petra Kelly who changed history and transformed environmental politics, only to find herself caught up in a triangle of love, jealousy and murder.