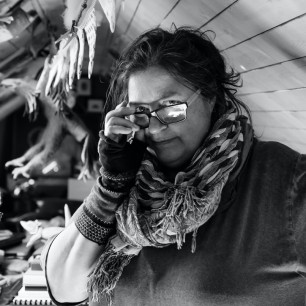 Jackie Morris grew up in the Vale of Evesham and studied at Hereford College of Arts and at Bath Academy. She won the CILIP Kate Greenaway Medal, the highest honour in children’s book illustration, for The Lost Words. She has illustrated for the New Statesman, the Independent, and the Guardian, collaborated with Ted Hughes, and has written and illustrated over forty books, including beloved classics such as The Snow Leopard, The Ice Bear, Song of the Golden Hare, Tell Me a Dragon, East of the Sun, West of the Moon, and The Wild Swans. Jackie Morris lives in a cottage on the cliffs of Pembrokeshire.