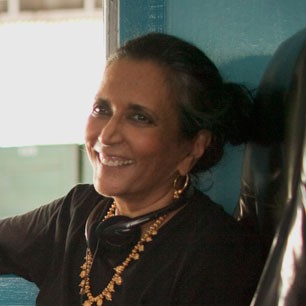 Deepa Mehta is a filmmaker who has been described as a “transnational artist”. Her movies are known for telling universally meaningful stories and have played at every major film festival; receiving awards and recognition, and have been distributed around the world. Deepa was born in India and received a degree in philosophy from the University of New Delhi. Before immigrating to Canada, she began her career making documentaries in India.

In 1991, Deepa’s first feature film Sam & Me, won an Honourable Mention in the Camera D'Or section of the Cannes Film Festival. In 1992, she directed two episodes of the Young Indiana Jones Chronicles, produced by George Lucas for ABC, followed by her second feature, Camilla, a Canada-UK co-production starring Jessica Tandy and Bridget Fonda.

Fire is the first film in her Elemental Trilogy; it opened Perspective Canada at the 1996 Toronto International Film Festival; played at the New York Film Festival and won awards at other international festivals. Fire is a love story between two women; its subject matter made its release in India highly controversial, resulting in the trashing of theatres and attacks on audiences by Hindu fundamentalists. In 1998 Deepa wrote and directed Earth, an adaptation of Cracking India, Bapsi Sidhwa's acclaimed novel about Partition. Earth is the second film in the Elemental Trilogy: Fire, Earth, Water.

Her 2002 movie Bollywood/ Hollywood, a subversive comedy about two mismatched lovers, was a box office hit and remains one of the top 10 grossing English Canadian movies.

Water is a hauntingly tragic story about an eight-year-old child widow who is forced to enter a house of widows – for the rest of her life. This film was to shoot in India, but Hindu fundamentalists incited riots, burnt sets and issued death threats against the director and actors, forcing the film to stop production. Four years later the movie was successfully remounted and shot in Sri Lanka. Water is an audience favourite and it was the Opening Night film at the 2005 Toronto International Film Festival.

In 2006 Water received an Academy Award nomination in the Best Foreign Film category. In 2006 Deepa made a documentary about domestic violence in immigrant families called Let’s Talk About It. She followed the documentary with a feature film, Heaven On Earth that explores isolation, arranged marriages, and the power of imagination.