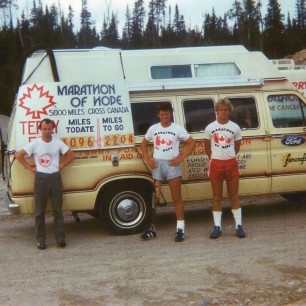 Darrell Fox is the younger brother of Terry Fox. In late May 1980, at the age of 17, Darrell joined Terry (and Terry's best friend Doug Alward) on his Marathon of Hope in Saint John, New Brunswick. Darrell has had a long history of involvement with the legacy founded by his brother beyond spending 4 months in a smelly Ford Econoline van witnessing Terry take on the impossible. In 1990, Darrell became the provincial director for The Terry Fox Foundation in British Columbia. In 1994, he moved to the National Office in Toronto, Ontario where he served as the assistant national director and then national director of the Terry Fox Foundation from January 1996 until June 2009. Today Darrell serves on the TFRI's Board of Directors, is a Senior Advisor to the Institute and along with fellow descendants of Betty and Rolly Fox is a member of both the Terry Fox Foundation and Terry Fox Research Institute. A holder of the Queen's Diamond Jubilee Medal, Darrell continues to be involved in fundraising, story and recognition initiatives related to Terry Fox and his legacy.