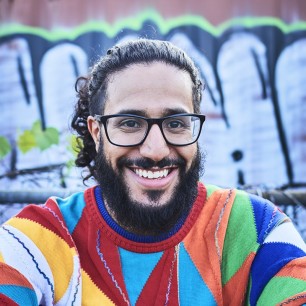 Khaleefa ‘Apollo the Child’ Hamdan is a spoken word poet, hip hop artist, radio host, youth worker and is the former co director of the Urban Legends Poetry Collective. Apollo is one half of the hip hop duo Poetic Elements and is also a member of the collective Dead Ringer. Apollo created the after school youth writing program Youth Speak with the Ottawa Public Library and he hosts the Home Invasion Show and New Jack City on CKCUFM. His cinepoem 'My Hero Drives a Cab' was featured on Button Poetry and he was part of the CBC documentary 'In Their Words'. Apollo has represented Ottawa a total of 9 times nationally and recently represented Canada in The Martin Luther King International Art Showcase in Atlanta, Georgia organized by Bernice A. King. Apollo continues to be an active part of the art scene.