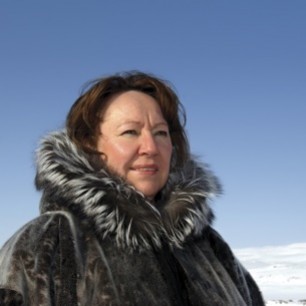 Sheila Watt-Cloutier is one of the world’s most recognized environmental and human rights activists. Experienced in working with global decision makers for over a decade, Watt-Cloutier offers a new model for twenty-first-century leadership. She treats the issues of our day—the environment, the economy, foreign policy, global health, and sustainability—not as separate concerns, but as a deeply interconnected whole. In 2007, Watt-Cloutier was nominated for the Nobel Peace Prize for her advocacy work in showing the impact global climate change has on human rights, especially in the Arctic, where it is felt more immediately and more dramatically than anywhere else in the world.

In addition to her Nobel nomination, Watt-Cloutier has been awarded the Aboriginal Achievement Award, the UN Champion of the Earth Award, and the prestigious Norwegian Sophie Prize. She is also an officer of the Order of Canada. From 1995 to 2002, she served as the elected Canadian president of the Inuit Circumpolar Council (ICC). In 2002, she was elected international chair of the council. Under her leadership, the world’s first international legal action on climate change was launched with a petition to the Inter-American Commission on Human Rights.