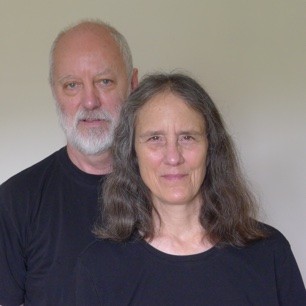 Roo Borson is the author of ten books of poetry, including Short Journey Upriver Toward Oishida, which won the Governor General's Literary Award for Poetry, the Griffin Poetry Prize, and the Pat Lowther Memorial Award. She has also been involved in a number of collaborative projects, including Introduction to the Introduction to Wang Wei, by Pain Not Bread (Roo Borson, Kim Maltman, Andy Patton). Her work has appeared in numerous anthologies, such as Twentieth Century Poetry and Poetics, the Harbrace Anthology of Poetry, and the Norton Introduction to Literature. Roo Borson lives in Toronto with poet and collaborator Kim Maltman.

Kim Maltman is a poet and physicist. He currently teaches in the Department of Mathematics and Statistics, York University, and does research in theoretical particle physics. He has published six collections of poetry and he is the author of the collaborative work of poetry, Introduction to the Introduction to Wang Wei by Pain Not Bread (Roo Borson, Kim Maltman, Andy Patton). He lives in Toronto with poet and collaborator Roo Borson.