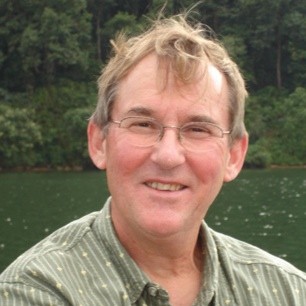 Nick Gray was born and grew up in Sheffield, England, the middle of three children, and the only boy. His older sister, Patricia, is a retired academic from Cambridge University, and his younger sister, Charlotte, is a biographer and historian who lives in Ottawa.

As a child, his favorite subjects were English, Geography, and History. His interest in faraway places was reflected in his favorite book, the World Atlas, and his hobby, stamp collecting. Nick attended Oxford University, where he earned an M.A. in Law.

Nick has been working in television for over 40 years, primarily making documentaries for both British and U.S. television. Several of his films have featured children: a young Peruvian searching for her father who “disappeared” in the civil war; a Haitian teenager who was given a new face by Miami surgeons, and young women taken to Yemen as forced brides.

In the course of his career, Nick has been shot at in Belfast; the Peruvian hotel where he was staying was bombed; he’s been threatened with summary execution in Lebanon, jailed in Algeria, stoned by Yemeni villagers, stalked by a black bear in Siberia, and narrowly avoided a brawl in Ethiopia!

His films have won many international awards, including BAFTA and International Emmy nominations. They have been honored by the Vatican, the Church of England, the United Nations, and Amnesty International, and many have had screenings in festivals and theaters.

His book with Annick, Escape from Tibet: A True Story (Fall 2014), grew out of a chance meeting with two brothers high in the Himalayas, as they were attempting to escape from Tibet. Their story became the main element in his award-winning documentary film of the same name, which exposed the plight of the Tibetan people under Chinese rule. Nick subsequently brought the brothers to live in England, where he continues his friendship with them.

His advice for aspiring authors is to keep reading, keep writing, keep asking for advice, and take any opportunity for training.

Nick lives with his wife and two Burmese cats in Lincoln, England, where he has been a Visiting Professor in Documentary Production at the University of Lincoln since 2007.

For more information about the documentary and the book, go to www.escapefromtibet.org.