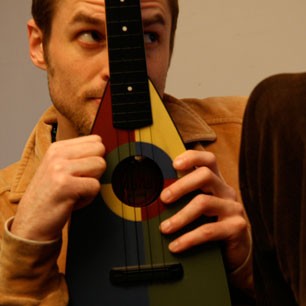 Neil Gerster once fronted the Ottawa pop-folk quartet Lighthousekeepers from 2001-2003. As far as public profile goes, he thereafter buried himself under a rock, re-emerging in 2011 with his "ukulele album", Hearts and Other Shipwrecks, containing 14 tracks of poetic lyrics, summer sounds, sea imagery, tales of online dating, mellotron accents, but especially the sounds of ukuleles and banjoleles throughout.

His first ukulele was an bought grudgindly: a week of imagining a high-pitched, gut-stringed strumming in a song he was writing ended in a trip to a music store and an impulse buy. The next week, he wrote three new songs. The uke was almost instantly the easiest instrument for him to compose with.