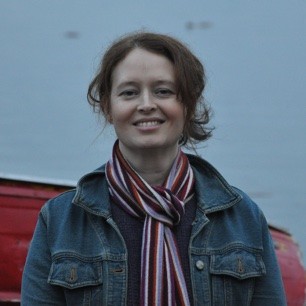 Kara Stanley grew up in southern Ontario, horseback riding and skiing the hills surrounding Orangeville as a child and frequenting the music festivals and after hour bars of Toronto as a teenager. She earned a BA in English Literature at Concordia in Montreal (all the while living with a musician and raising an infant) before relocating to British Columbia’s Sunshine Coast where she earned an MFA in Creative Writing at UBC (all the while living with a musician and raising an adolescent). She is a lover of Tom Waits' songs, striped socks, flannel sheets, dancing with abandon and dates stuffed with almonds. A writer of stories, essays and song lyrics, Kara has also worked as a bread baker, a creative writing teacher and an advocate for adults with developmental disabilities. Her writing has appeared in Fugue , HipMama , and Paste . A classically trained Pilates instructor, Kara currently works as a teacher and practitioner of mindful movement. Amongst others, she has been inspired by Marie Curie, Emily Dickinson, Pippi Longstocking, Anne of Green Gables, Harriet the Spy, Billie Holiday, Amelia Earhart, Joan Didion, Jane Goodall, and Patti Smith. She equally appreciates a forest hike with her dog or a long, hot bath. From time to time she pines to travel. Now the proud parent of an exceptional young man, she still lives with the musician. He is her best friend.