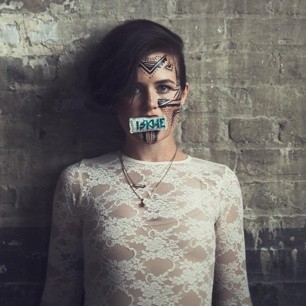 Called ‘One to Watch’ by The Grid TO and one of the ‘Top 10 Canadian Musicians
You Need to Know’ by CBC Music, Iskwé’s cross-cultural aesthetic is as striking
as her tripped-out blend of soul. The name Iskwé (pronounced iss-kway) means
‘woman’ in her native language. Iskwé’s debut album weaves together her Irish
and Cree/Dene roots with hip hop breakbeats, left-field R&B, and traces of piano
pop (Think Esthero meets Alicia Keys).


The album incorporates an amalgam of sonic techniques that embrace mood and
atmosphere while echoing traditional pop codes. Vintage record crackles and
downtempo undercurrents on “So Over You” bring to mind the trip hop ambiance
of Portishead, seguing into the hip-swaying beats of “Recycle,” featuring a cameo
from M1 of Dead Prez, and shaped around Iskwé’s smooth-as-butter vocals.
The pop/soul diva tries her hand at electronica on “Wandering,” a cut that swirls
into club-banging territory with its massive dubstep drops.


“One Better” is a call-to-action break-up anthem sung with the pain of past
experience, while the equally empowering closing track “Slack Jaw, which
features crawling electro-fused basslines and scorching guitars courtesy of Donna
Grantis (current guitarist for Prince), Iskwé can’t hide her apathy to try and fit
into the current pop landscape with lines, such as “I ain’t got no energy to make it
as a pop/rock star. Even though I’ve been dreaming that I’d go far.”
“Slack Jaw” was also recently listed as #1 on the National Aboriginal Music
Countdown, and was voted regional finalist of CBC Music’s Searchlight
competition.


The Winnipeg-bred, Toronto-based singer-songwriter, who has also had stints in
LA and NYC, has performed alongside Motown greats The Funk Brothers and
electronic DJ crew A Tribe Called Red. Singing about her struggle to fit
into/break away from Western archetypes, Iskwé’s connection to her roots and
traditions is an important part of her artistic vision. With her debut effort, Iskwé
carves out her own musical identity, bridging her modern and cultural influences
while challenging the current mold.
……………………………………….
"Iskwé’s self-titled debut album is as beautifully written as it is executed. Her
voice is both wonderfully smooth and commanding of attention. The smokefilled
jazz-room feel is a breath of fresh air in a stagnant Canadian pop scene" -
Dee Jay NDN, A Tribe Called Red."


“Empowerment R&B and diva-in-the-making soul-pop swoops, from one of the
coolest looking women in Canadian music. Ke$ha only wishes she could pull off
this style.” – Andrea Warner, CBC Music