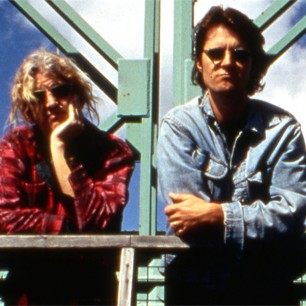 A few years after graduation Jim [Cuddy] and I started a band called the Hi Fi’s, which was in that new wave amphetamine punk school. I listened to a lot of British Invasion stuff and then, a lot of bands that came out in ‘76 and ‘77. After starting that band, we went down to New York, lived there for a while, came back and started Blue Rodeo. We needed some players and thought of Cleave Anderson, our first drummer, as he was in a lot of our favourite bands at the time. He asked his friend Bazil [Donovan] to join.

Bobby [Wiseman] was the younger brother of a friend of ours and we just ended up jamming with him a few times. His influences were quite different, as he was more into the improv school of music and jazz, and he brought a whole new musical avenue to what we were doing. It was very exciting at the time. We picked the name Blue Rodeo just to underline the country a little bit. I liked a lot of that San Franciscan music of the late '60s, country Joe and the Fish, Quicksilver, all those dreamy countrified landscapes.

In the early days we were part of the punk school, so everything was really loud and aggressive. Even though our records didn't sound like that, we were always playing maxed-out and fast. I was a little more berserk back then. Now, the way we play music is consciously different. It's a little more connected. We were still unruly on stage sometimes, but, as musicians, we were a lot more disciplined.

When I was writing songs for [Nowhere To Hide] I had been living on my farm for an extended period of time, by myself, without much contact with people. Everything had equal life to me out there. It was a very pleasant state of mind to be in. I'd be sitting in this room with this fireplace, and I'd be singing songs to it all the time like it was listening to me, and we sort of fell in love in a way. And then, one night, I woke up and my whole bed was covered in flames. There were tongues of fire everywhere, my mattress was burning and I was consumed in this fire. I realized that the fire had woken me because she wanted to consummate her relationship with me, but she knew that if our spirits were to entwine it would kill my flesh, so she sacrificed herself. To love me she would have to kill me, so she gave herself. That's where the song "Flaming Bed" came from.