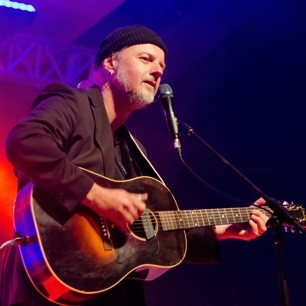 "Night Drive: Travels with My Brother", Garnet Rogers' 735-page memoir about his travels with brother Stan Rogers, was published by Tickle Shore Publishing in 2016.

Born in Hamilton, Ontario to parents of Nova Scotian descent, Garnet Rogers spent many hours in front of the old floor model radio listening to Grand Ol' Opry broadcasts and harmonizing with his older brother, Stan. Two years later, Garnet was playing the definitive 8-year-old's version of "Desolation Row" on his ukulele! He soon started teaching himself to play flute, violin and guitar.

At age 18, Garnet was on the road as a full-time working musician with Stan. Together, they formed what is considered one of the most influential duos in the history of North American folk music. Garnet and Stan toured and recorded together from 1973 to 1983, when Stan died in a plane crash.

Since that time, Garnet has established himself as a formidable solo artist. With his smooth, dark baritone voice, his extensive vocal range and his thoughtful, dramatic phrasing, Garnet is one of the finest singers anywhere. Backed by his consummate guitar skills, his cinematic songs are literate, passionate, sensitive and purposeful, giving expression to the unspoken language of the heart. In performance, Garnet's touching songs combined with his wit and humour move audiences from tears to laughter and back again.

“A brilliant songwriter. One of the major talents of our time.” – The Boston Globe

"This is good and rich and big music. Welcome one and all. Come on in. Get down.” – Greg Brown