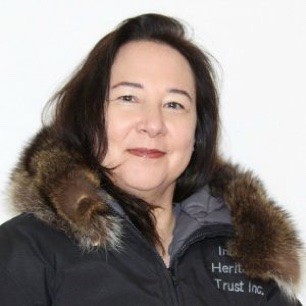 Deborah Kigjugalik Webster grew up in Baker Lake, Nunavut, where she loved to learn about her Inuit culture and heritage. She has a degree in Anthropology from Carleton University in Ottawa, Ontario, and works as an Inuit heritage researcher and author. Deborah is the author of 2 books including Harvaqtuurmiut Heritage: The Heritage of the Inuit of the Lower Kazan River (Artisan Press Ltd., 1998) and Akilak’s Adventure (Inhabit Media, 2016). She has presented at the NorthWords Writers Festival in Yellowknife, Word on the Street in Toronto, Ottawa International Writers Festival, the Ottawa Grassroots Festival, and has done several Author’s Visits to libraries in the Ottawa area, and at Chapters. Deborah lives in Ottawa with her 2 teenage daughters and pet dog.