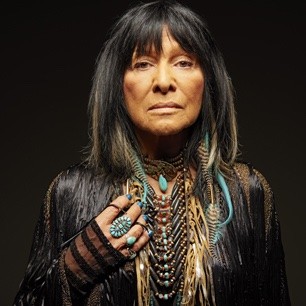 Buffy Sainte-Marie’s bold new album, Power in the Blood, begins where it all started more than 50 years ago, with a contemporary version of “It’s My Way,” the title track of her 1964 debut. Its message, about the road to self-identity and the conviction to be oneself, still resonates with the Cree singer-songwriter, activist, educator, visual artist, and winner of countless awards (Oscar, Juno, and Golden Globe, among them).

Sainte-Marie’s creativity is always in motion, and her passport's always in hand, touring for lectures and performances around the world with her high-octane backing band. She records only when she feels like touring, and currently Sainte-Marie is taking center stage around the world, including North America, Europe and Australia.

Her latest record is an honest reflection of Sainte-Marie. The hallmarks of her catalog – the eclecticism and compassion she brings to each album, oblivious to genre boundaries and production trends – are in glorious bloom here. It’s the Buffy you know and love, and it’s geared for contemporary audiences.

Often pegged as a folk singer – particularly by past record labels that either failed or were unwilling to see how far ahead of the curve she was – Sainte-Marie never fully fit in with her ’60s contemporaries. While her peers were singing the centuries-old folk ballads she may have adored, her songs sprang from her own imagination and were effortlessly unique.

In truth, and this is often overlooked, Sainte-Marie is like an investigative journalist who prods and provokes to tell another side of a story. She tells the part of the narrative that has been conveniently left out of history books. Her songs have been a light in the dark, uncovering everything from corporate greed (“No No Keshagesh”) to violations of human rights (“My Country ’Tis of Thy People You’re Dying”) to governmental abuse of the very people it’s supposed to protect (“Bury My Heart at Wounded Knee” and it's companion from this latest album, “The Uranium War”).

That unwavering resilience has rippled across genres and generations, even as Sainte-Marie’s profile in the United States diminished significantly when she was blacklisted in the ’70s. Recognizing the power of her songwriting and activism, the Lyndon Johnson and Richard Nixon administrations considered her an “artist to be suppressed,” and Sainte-Marie all but disappeared from the US music industry.

Power in the Blood is a reminder that, five decades on, it is still futile to silence artists or to put Sainte-Marie in any single category. She simply doesn’t fit. Yes, she can inspire you to rise up and take action, but she can just as easily melt your heart with a tender ballad. Go back to “Until It’s Time for You to Go” and you’ll be hard-pressed to say when it was written or for whom. It’s evergreen and, like so much of Sainte-Marie’s work, it’s universal.

“I love words, I love thinking, and I recognize and value the core of a universal idea simplified into a three-minute song,” she says. “What appealed to me in folk music were the songs that have lasted for generations, but I wasn’t trying to be one of those guys. I wanted to give people something original.”