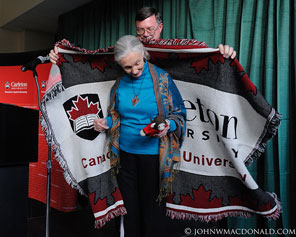 About the Writers Festival

The imagination is our most valuable renewable resource. So, twice a year we convene an international celebration of ideas to recharge our imaginations. From politics to poetry, science to music, history to thrillers, we celebrate the full diversity of the word and the gifted writers who guide us in our exploration of the world. Our year-round special events keep the ideas coming between Festivals.

We believe that a love of reading and learning should be nurtured throughout our lives and that literacy is a birthright. Whether offering writing workshops to the homeless, hosting a Nobel Laureate, organizing our biannual literary celebrations or bringing authors into area schools, our goal is the same: to create an environment that activates creativity and encourages the love of reading, learning and self-expression.

The Ottawa International Writers Festival is dedicated to providing a welcoming, respectful and comfortable environment for all. In response to complaints of harassment or inappropriate behaviour that are brought to the attention of staff, guests may be asked to change their behaviour or to leave, at the discretion of the festival. Festival staff will use their judgment to respond to any incidents or allegations.
Diversity is a fundamental feature of our community and our programming. All races, religions and sexual orientations have and will continue to play a prominent role on and off our stage. We affirm and acknowledge that fundamental human rights include protections from harassment and discrimination.  We are committed to empathy, compassion and respect in all our interactions.
Our work is rooted in a recognition of the inherent dignity and of the equal and inalienable rights of all members of the human family. These fundamental rights are the very foundation for freedom, justice and peace in the world, and we are committed to continuing to work to ensure that our community is welcome, respected, and safe. Our performance venue is fully accessible, hearing assist technology is available to all patrons, and accommodations will be made to ensure no one is excluded from participating in our activities. If you have any questions or concerns about equity, access, or safety please do not hesitate to contact us. 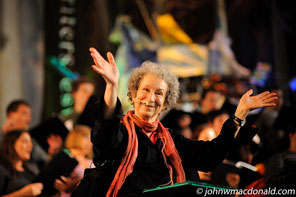 Oneness-World Communications is a charitable corporation (Charitable # 86830 7778 RR0001) whose mission is “to promote an appreciation of the cultural arts in Canada through public events; to create and manage public events that promote literacy and the cultural arts; and to provide related services. The most visible manifestation of this mission is the Ottawa International Writers Festival, Spring and Fall Editions.” 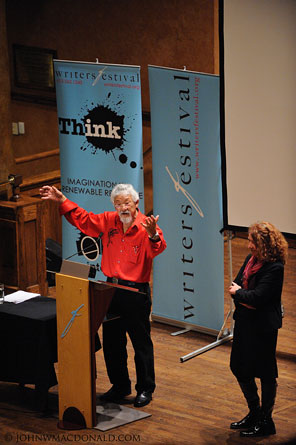 Renowned poets performing at the top of their game and interacting with the audience is live literature at its best. Some would argue that poetry needs to be read aloud. We would agree and add that there’s nothing like hearing the cadence and tone of poems when delivered by the authors themselves.

Audiences in Ottawa, as befitting a national capital and an international city, demand the highest level of debate and discussion. THE BIG IDEA, our town-hall style discussion with audience participation, covers the issues of the day.

This is where book-lovers come to hear their favourite stories come to life as read by the author. More than a reading, our Fiction events also feature on-stage conversations where authors engage with the audience and their peers. Often funny, occasionally moving, and always fascinating, The Writing Life is an opportunity to spend time with the greats, to meet up-and-coming authors, and to get to know the inspiration behind the works.

With climate change, clones, superbugs, genetic discoveries and life on Mars making headlines around the world, it’s not just experts at the NRC or intellects on campus who are fascinated by the latest scientific breakthroughs. Cutting-edge developments presented to general audiences in an interactive setting are the essence of ‘The New Science’.

Some of the world’s best writing is happening outside the pages of books. The Writers Festival regularly features staged play readings, feature films, documentaries, CD launches and songwriters circles. Innovative programming expands the Festival’s reach to youth, reluctant readers and the community at large.

History/Biography and Other Non-Fiction

With non-fiction topping bestseller lists, Festival programming features a growing number of acclaimed biographers and popular historians. With a special focus on Canadian events and including local as well as international authors, we offer audiences the opportunity to explore the world from many perspectives and to spend time with many of the most fascinating characters of today and yesteryear.